I should be calling it THANK YOU note though- because of you guys and your love, (I would seriously not bother to write anything were it not for you), this OneShot won Runner-Up for Best OS of the Week!!!! EEEPS!!! I'm so excited and happy and terribly honoured!

A huge thank you to  ArHilicious Droolers #15: Tu Jaane Nah...for selecting this OneShot- I was not expecting it at all, and I am well and truly honoured and flattered and floating on cloud 9  :D

And many thanks to everyone who's read this and written such sweet and wonderful comments for it too!! I mean, you guys are just going to make me cry (in a good way!) And oooh look at this siggy!!! It's so beautiful! 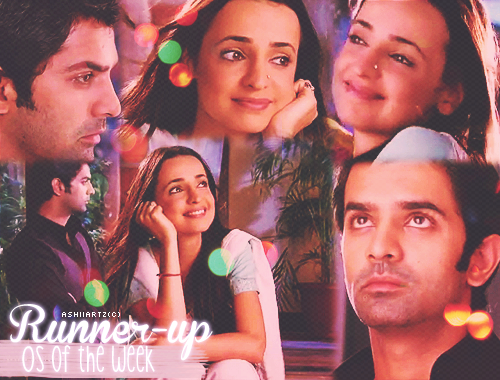 Thank you all so much- wouldn't be here without you! <3

Another dialogue-only OneShot written while suffering a severe lack of sleep and trying to finish the last NYR update that just keeps getting longer and longer. I really hope it makes sense- I really, really do. A lot of things in this OneShot have not been explicitly stated- you have to guess from what the characters are saying what's going on. Anyway wanna try? :)

"Hey! What are you talking about? Yellow is a lovely colour! It's bright and cheerful and warm and-"

"And I will not allow my nephew or niece's room decor to be decided by such selfish motivations."

"I'm not being selfish! I honestly think yellow would go nicely on the walls here, especially since we don't know the gender of the baby yet and-"

"Anjaliji herself asked me to choose!"

"She's pregnant, I can't blame her if it's addled her brains a little..."

"Try, but it's not going to work. We are not painting this room yellow, and that's final."

"Why not? I understand that you prefer to live in the dark like some hermit, but I won't have you turning the baby into a social outcast!"

"Ah, and using yellow will prevent the baby from becoming a social outcast? What an intriguing hypothesis. Perhaps you can prove it someday and then I'll-"

"Uff! All I'm saying is, what's wrong with brightening up the room a bit? It'll be like sunshine-"

"Oh, really!?? And what would you have it painted then, oh great-all-knowing-supreme-prince-of-judgement?! Black?"

"Not quite what I was going for-"

"Gasp! I don't believe you, why would you try to make a small child's room as depressing as-"

"HOWEVER, it would still make the stars stand out nicely-"

"That's not the point, it'll be like forever-night in he-...wait, what did you say?"

"I suspected you would go deaf from your own screaming one day."

"Would it kill you to speak nicely once in a while?"

"I'd rather not risk it to find out."

"Uffo, whatever. What did you say just now, about stars?"

"I'm not sure if you will grasp this simple logic, Khushi Kumari Gupta, but I believe star-lights would stand out more against darker shades than yellow."

"You don't have to look so appalled when you say that!"

"Can't be helped if the idea is appalling-"

"And what do you mean by star-lights? You mean...you're going to hang up lights like that here?"

"I believe my meaning was clear enough, by I will have pity on you and reiterate it- yes."

"Like the ones I have in my room, back home?"

"Congratulations on being able to distinguish the standard shape of stars, Khushi, I always knew you could do it."

"It's no wonder you can't eat sweets, they'd all sour on that tongue of yours."

"Insightful as your observation is, let's get back to the matter at hand- we are not painting this room yellow, we'll paint it royal blue."

"There's no need to make such undignified noises, Khushi. Spit out what you want to say and stop groaning."

"You're going to turn this poor, unborn child's room into a replica of your own, I can tell."

"At least it would reflect good taste-"

"It'd reflect the birth of another stuck-up, obnoxious Laad Governor, that's what it would reflect."

"And if you are so keen on painting walls yellow, you can do it in my room."

"You really have lost your hearing, haven't you?"

"I might have, but I think you must have lost your marbles. You just said you'd let me-"

"Don't tell me you believe in those narrow-minded stereotypes of pink-for-girls and blue-for-boys too?"

"As much as you'd like to be an advocate for equal rights, Arnavji, royal blue is still too...it's still too serious for a child! Come on, you can make the room as lifeless as you want after he or she has grown up a little bit- let them have a little fun while they still can."

"Yellow is not my idea of fun."

"You want to make this place look like a jungle?"

"Hai Devi Maiyya, what kind of musibat have you left me to deal with?- Not jungle green, I'm not crazy-"

"Something lighter and nicer, like...this one, maybe, "Apple Green", or that one, that's nice and not too bright and not too dark..."

"And you like plants anyway right, and this would give the room a natural feel-"

"And besides, green is a mix of yellow and blue, so it's a compromise and-"

"I approve of green."

"Just- just like that? You won't even insult me or say anything condescending?"

"Of course I don't but- wait, so you don't want yellow because you think the stars won't stand out against it, but you won't complain about that with green? I knew it, you really are saying no to yellow to annoy me-"

"Green is at least part blue."

"What kind of logic is that?!"

"Why are you complaining now? It's part yellow too."

"Or do you want me to switch it back to blue again?"

"I don't think two rooms in this house should be of the same colour, as it were."

"...but there are no yellow rooms in this house-"

"I'm not talking about right now."

"Then what are you-"

"And we'll figure out then if stars go as well with yellow as they do with blue."

"I give up. I never understand what you're talking about anyway-"

"That's because you can't spot the obvious-"

"-and you'd probably pass out if I told you anything bluntly anyway."

"Are you calling me stupid?!!"

"No, Khushi Kumari Gupta, I am calling you oblivious."

"So until you're ready to finally understand what I've been trying to say, you can put your yellow tins of paint away, because there is only one place I'm going to allow you to use it."

"Arnavji! Arnavji! Oy! Laad Governor!!- Hai Devi Maiyya, what's wrong with this man? First he says so many confusing things, and then he calls me oblivious! Either a complete genius or a complete lunatic would understand what he's saying...I bet he doesn't want to use yellow only to annoy me, because it's my favourite col- wait... How did he know that yellow is..."

My other dialogue-only one-shots:

Thank you for reading, and I hope you liked it :) Any guesses on what Arnav was trying to say here? There's a bunch of implied meaning around and I only hope they make sense, because I tend to not make sense too early in the morning and...yeah :s

I reserve all rights over this work of fiction and request readers do not reproduce/copy/modify it elsewhere and/or claim credit.

loved the os khushi is really thick when she is ready poor asr he will have to draw a map and pt sticky notes on loved the os loved asr underline message and the banter is to die for awesome thanks for the pm.  Edited by dumas - 7 years ago
3
REPLY QUOTE

Arnav trying to give Khushi a hint and she is totally oblivious of it :)
1
REPLY QUOTE

That was just to funny. Dang, sometimes that girl is so clueless.

Haw   !!!! Here Arnav is proposing and Khushi as usual is clueless
1
REPLY QUOTE

Superb. Arnav is proposing if they are not married yet. or planning for a baby if they are married.
1
REPLY QUOTE

Omg! Nafi dont ever let that bone die inside you - which makes you write such stuff!

It was hilarious and cute at the same time! I still have a goofy grin on my face.

Loved it. It's a perfect sibling to bedside manners!

Haw   !!!! Here Arnav is proposing and Khushi as usual is clueless

I am sorry but I am thick as Khushi here early morning!

He was proposing??  need to re-read this OS to get the hidden implied meanings!