View Profile
Rarely do we encounter a resident of B-Town who can sidestep the routine spats and somehow manage to be on good terms with everyone. Or almost!

Karan Johar, unabashedly a close friend of Shah Rukh Khan, has expressed an interest to work once more with Salman Khan. Their last vent 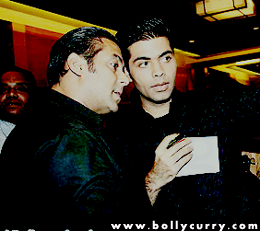 ure together was Sallu's cameo in the wildly successful Kuch Kuch Hota Hai.  Which has been a while. Of course, need we mention the on-again, off-again Salman-SRK discord that has filled up the duration of that while?

Apparently, Karan has approached the 'bad boy' of Bollywood for the politically-inclined comedy Sahi Dhandhe, Galat Bande by Parvin Dabbas.  The cast list for this project already includes Anupam Kher, Parvin Dabbas, Vansh Bharadwaj among others, the title for which was actually suggested to Parvin by a follower on the ever useful Twitter!

Karan found both the title and script quite impressive.  Now, it remains to be seen whether Salman's opinion shall concur with his!

While KJo's attempt in vain at wooing Salman on his Koffee couch is still fresh news, we wonder how bringing him aboard a movie project will work out. Of course, we only wish it does, and for the good!