Distributed worldwide by Eros with around 2,000 prints worldwide, 'Kambakkht...' hit more than 1,400 screens in India and about 600 overseas in a combination of prints and digital format. 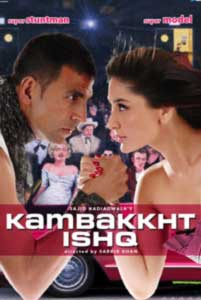 Featured Video
Directed by debutant Sabbir Khan, it released across India as well as in Pakistan, Britain, US, Australia, Europe, South Africa, Fiji Islands, the Middle East and Malaysia, among others.


Released July 3, the film opened to extraordinary advance bookings courtesy its unprecedented buzz and has brought a new lease of life for Akshay's flagging career after two major duds 'Chandni Chowk To China' and '8X10 Tasveer'.


'Kambakkht Ishq' is doing exceedingly well in all the overseas markets. All major markets like US, Gulf, Australia and even Pakistan have shown extraordinary box office performance in first week,' said Pranab Kapadia, president of Eros International in a statement released here Friday.


Kapadia looks after Eros' distribution in Europe and Africa.


Nandu Ahuja, the senior vice president who looks after distribution in the domestic market for the company, says after the overwhelming weekend collection, the movie is going steady.


'The film has remained steady during the week post the stupendous opening weekend. The film is continuing to show fabulous collections and we are sure the film will continue to enjoy a fantastic run,' he said.


Co-produced by Sajid Nadiadwala and Sunil A. Lulla, the film was made on a budget of Rs.62 crore (Rs.620 million) including print and advertisement costs and has grossed around Rs.70 crore (Rs.700 million) in the domestic market and Rs.21 crore (Rs.210 million) overseas.


The music and digital rights of the film have fetched around Rs.10 crore (Rs.100 million)


The film earned around Rs.19 crore (Rs.190 million) worldwide on its opening day.

Apart from the death-defying stunts by Akshay, the film also has much publicised cameos by Hollywood stars like Sylvester Stallone, Brandon Routh and Denise Richards.