Director Priyadarshan is back with the 'Hera Pheri' team to make a no-holds-barred comedy titled 'Aise Ko Taisa'.

Having gotten over his films with Akshaye Khanna, Priyadarshan now teams up with the other actor of the same name.

'That's right. I'm getting together with Akshay Kumar and the whole 'Hera Pheri' team of Paresh Rawal and Suniel Shetty for a no-holds-barred comedy,' Priyadarshan told IANS.

After Priyanka Chopra and Katrina Kaif, Akshay will team up with Asin, who's also Aamir Khan's heroine in the much talked-about 'Ghajini', in the film. 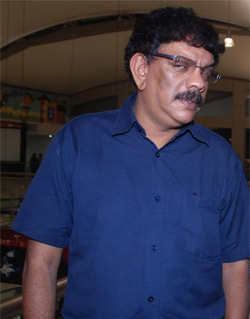 So is 'Aise Ko Taisa' going to be a full-fledged chuckle fest?

'Oh absolutely,' avers Priyan. 'It'd be a complete laugh riot. The film will have 22 actors, including Johnny Lever with whom, believe it or not, I've never worked in any of my comedies.

'And though it brings together the principal actors from 'Hera Pheri', 'Aise Ko Taisa' will have nothing to do with 'Hera Pheri' in terms of plot.'

'Aise Ko Taisa' is ready to be shot in one stretch from Nov 20 for producers Venus.

Currently the director is busy with the Shah Rukh Khan starrer 'Billoo Barbar', which is almost complete. 'We've about 20 days' shooting. Then 'Billoo Barbar' is done. We're aiming at a Diwali release.'

Priyan isn't the least perturbed by the mixed response to his recent comic caper 'Mere Baap Pehle Aap' that has Akshaye, Paresh and Om Puri.

'Some people are saying that the film is too long. Others are saying the comedy is diluted by the drama that comes in the second half. I'm used to these reactions.

'Critics and the so-called intelligentsia aren't happy with my recent films. That's okay. It's more important for a film to run than for critics to applaud it. I don't make films for my own satisfaction. If I did, I wouldn't be considered the highest-paid director in the country.'

Priyan is now going back to his roots.

'My Tamil film 'Kanjeevaram' is my most satisfying film to date. I've made it straight from the heart.'

Priyan has shown it to colleagues in Mumbai. And they've all reacted with disbelief. 'In fact, when I showed it to Govind Nihalani, he said, 'Priyan, is this really you?' I don't know whether I should take that as a compliment!'