View Profile
We are talking about Kareena Kapoor, who performed as the Goddess of Bollywood, at the IIFA awards in Bangkok. And of course also bagged the best actress award for her power house performance in Jab We Met. The actress has bagged the maximum number of awards this year for Jab We Met and of course, she is obviously excited about the superb reactions to her live performance that showed her making a grand entrance on a huge lotus and her Best Actress Award. 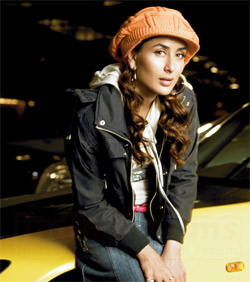 Kareena adds, "Manish designed some very colourful outfits. The entire act, I was told, came across as very sexy and glamorous."

Praising Manish, Kareena says, "He has worked very hard on my costumes. He sat with the organizers, Wizcraft, and meticulously worked a theme and costume for every song."

Kareena also credits Shiamak Davar for her creative act. "Shiamak, who has created the act has come up with a different colour and for every theme", exclaims Bebo.

Kareena has no regrets about Tashan bombing at the box-office. She says, "My performance has been appreciated. In fact my look and style has started a trend of sorts and I am happy about that." And how does she feel about being the best actress of this year? "On top of the world," beams Bebo.