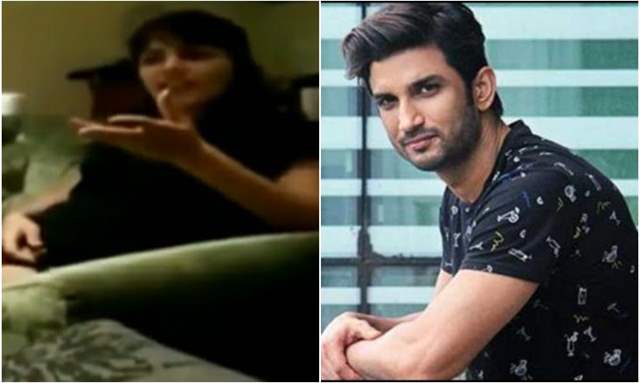 An old video of Rhea Chakraborty has made its way online, where the actress can be heard talking about controlling her boyfriend Sushant Singh Rajput. The shocking video seems to be old, however, the authenticity cannot be verified as of now. News Channel CNN News 18 shared the video wherein Rhea says, ‘My boyfriend thinks he’s the don when actually I am the on.’

In the video Rhea is seen saying, “I am the bigger don, I know how to manipulate these small goons. My boyfriend also thinks that he’s a gangster. But he doesn’t know that I am the actual don. I belong to a different class than these small goons. I don’t get my hands dirty, I make others do the task. For instance, I can even ask them to go to a producer and collect ‘hafta.’ They can think they are the don, but in reality, they are only working for one.”

The video ends when Rhea says 'Don't record this'.

The date and time of this shocking video is yet to be verified. Check it out below:

Meanwhile, Rhea Chakraborty came under the scanner after  Sushant Singh Rajput’s death case after the late actor’s father K K Singh filed an FIR against  Rhea Chakraborty and five other people for abetment of suicide at Rajiv Nagar Police Thana in Patna. He has alleged that Rhea took money from Sushant and instigated him to commit suicide.

However, Rhea has filed a petition in Supreme Court seeking the transfer of investigation in Sushant Singh Rajput's death to Mumbai and denied all the allegations made by Sushant’s father.

Rohit Roy and Manasi Joshi Roy give a new meaning to ...
30 minutes ago

I will open NGOs to give free education to children: Arun ...
32 minutes ago