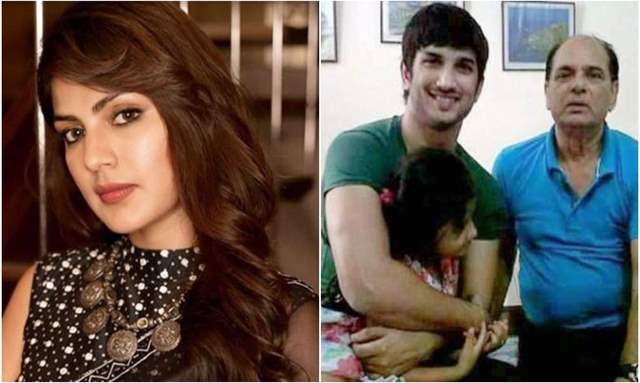 A new twist uncovered in Sushant Singh Rajput’s death case after the late actor’s father K K Singh filed an FIR against  Rhea Chakraborty and five other people for abetment of suicide at Rajiv Nagar Police Thana in Patna. He has alleged that Rhea took money from Sushant and instigated him to commit suicide.

Singh filed a 5-page complaint against Rhea wherein he claimed that the actress made Sushant move houses, change phone numbers and also change his personal bodyguard and staff. He also alleged that Rhea and his family duped Sushant's money and overdosed him on medicines by telling others that he had dengue. K K Singh also stated that Rhea threatened to leak Sushant's medical reports in public and instigated him to end his life.

On Wednesday, Rhea’s lawyer Satish Maneshinde confirmed that the actress has filed a petition in Supreme Court seeking the transfer of investigation in Sushant Singh Rajput's death to Mumbai. In the petition, Rhea has denied all the allegations in her petition to the Supreme Court. She said that she has been falsely implicated in the case filed by KK Singh and it has been filed "only to harass her".

“The Petitioner is an actress and is into acting since 2012. In the peculiar facts and circumstances of the present case, the Petitioner has been falsely implicated in the present case filed at the instance of Krishna Kishore Singh-father of the deceased…,” the plea said.

Rhea confessed that she was in a live-in relationship with Sushant for over a year till 8 June 2020, six days before Sushant allegedly committed suicide. In the petition, she also asserted that Sushant was suffering from depression and was taking anti-depressant pills.

She said, “It is pertinent to mention that the deceased and petitioner were in live-in relationship since a year up till June 8, 2020, when the petitioner had temporarily shifted to her own residence in Mumbai.” Her plea said, “Deceased was suffering from depression for some time and was also on anti-depressants and he committed suicide on the morning of June 14, 2020 at his Bandra residence by hanging himself. ‘Unnatural death report’ was filed by Bandra police station at Mumbai and causes leading to taking of such drastic steps are being examined.”

Rhea also mentioned that she is in deep trauma after Sushant’s demise and has been receiving death and rape threats. She added that she has filed a complaint at Santa Cruz police station against the rape and death threats.

As per a report in India TV, Rhea Chakraborty denied the following allegations made by Sushant Singh Rajput’s father K K Singh:

Rhea denied that she got close to Sushant under a pre-planned conspiracy to boost her film career, that she distanced Sushant from his family, that she left Sushant's house in Mumbai on 8th July with valuables.

Rhea also denied that she exercised power over Sushant when he was alive and forced him to abide by her decisions failing which she threatened him to make the medical papers of his mental health public and defame him.

Sushant Singh Rajput left for heavenly abode on June 14 2020. While his post mortem reports suggest asphyxia due to hanging as the reason for death, reports of professional rivalry have also come to the surface and are being probed by the Mumbai Police. Over 30 people including Mahesh Bhatt, Aditya Chopra, Mukesh Chabbra, Sanjay Leela Bhansali, Rhea Chakraborty, Sanjana Sanghi, Sushant's family, actor's house staff, his chartered accountant, YRF’s Shanoo Sharma, among others have been called for interrogation by the Police so far.

Rhea Chakraborty To Apply For Interim Bail After Sushant's Father ...

Salman Khan looking at a Republic Day release for upcoming ...
27 minutes ago

Kangana Hits Back at Aditya Thackeray's 'Dirty Politics' ...
9 hours ago