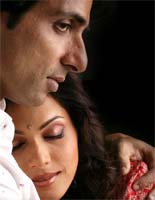 Every Rajshri film works for two reasons -- the storyline and strong emotions -- and EK VIVAAH... AISA BHI is no exception!


Movie revolves around Chandini (Isha Koppikar), a classical folk singer and dancer, falls in love with Prem (Sonu Sood), everything is going fine but right before their marriage, her father (Alok Nath) dies and Chandini has now whole lot of responsibility of her siblings, Anuj and Sandhya. Being from a middle class family, she is now the eldest and responsibilities can't be denied. So she cancels her marriage plans, while Prem is also determinant for his love and he waits 12years long for her.


The first half is kind of slow (must be all those songs) though the pace picks up in the second half. Music here is not as catchy as in the previous Rajshri outings.


Eesha Koppikhar excels in a role that focuses solely on performance.
Featured Video 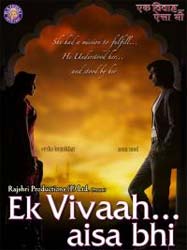 And she does act well for the most part. Sonu Sood looks a bit matured for his role, but the actor delivers a fine performance. Alok Nath and Vishal Malhotra (Chandni’s brother) are also good.


Debutante director Kaushik Ghatak remains faithful to the subject material and captures the sensitive moments well. In the later part of the film, you can't stop tears rolling down your cheeks, especially the Raksha Bandhan sequence and when the brother returns with his wife. Dialogues are good at places.


On the whole, at the box-office, the film started slow, but it has the chances to climb the ladder with each passing show. The strategy of releasing the film at single screens and that too at limited centers is a good idea, since EK VIVAAH... AISA BHI is not the multiplex kind of movie.


Bollycurry Rating: 3 chillies out of 5.


However far we go with popular the heart always clings to something that is traditional. so what your heart says to it Thumbs up or thumbs down...