He was almost written off as a non-starter star son when Tusshar Kapoor bounced back with "Shootout at Lokhandwala", proving that he is, after all, a chip of the old block. Now the actor is on the lookout for diverse roles that would cater to different sections of the audience. 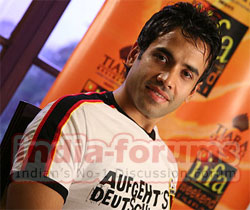 Featured Video
Tusshar began his filmi career in 2001 opposite Kareena Kapoor in "Mujhe Kuch Kehna Hai". Although the film won him a Filmfare Award for the best debutant, flops soon followed. "Khakee" gave him a much-needed boost, while "Kyaa Kool Hain Hum" and "Golmaal" took him a step up on the career ladder. But finally, it was "Shootout At Lokhandwala" which won Tusshar rave reviews. He is finally emerging out of his father Jeetendra's shadow and making his name count in the Hindi film industry.

"I signed "Shootout At Lokhandwala" because I needed to experiment. I could not have kept on doing the same kind of roles forever. I had done romantic and comedy roles to please the family audience and the kids. It was time to do a negative, tapori character for the masses. I got a lot of satisfaction from the role," says Tusshar, who believes the only way to win hearts is to cater to all kinds of audiences. He gives credit to Apoorva Lakhi and Sanjay Gupta for giving him a chance to play the character.

Besides growing as an actor, "Shootout" also changed the physical appearance of the actor, from a boy-next-door to a matured man. The metamorphosis took place when Tusshar was out of the limelight for a long period post-"Golmaal". "The working out began with "Shootout At Lokhandwala", before Shyam Bajaj's "Aggar" went on floor. After that I just continued with my fitness sessions," explains Tusshar, who shot for "Kya Love Story Hai", "Shootout At Lokhandwala", "Good Boy Bad Boy" and "Dhol" at the same time.
The actor says he would have rather had the releases at different times.However, unlike many others, Tusshar never had the airs of a star kid. Instead, he completely surrenders to the director. "I am a director's actor and look for a good director and a good script before signing up. But I do prepare for my roles. Sometimes you just have to be yourself on the sets, like in "Kyaa Kool Hai Hum", and at other times, you have to prepare, like in "Golmaal"," explains the brother of television saas-bahu saga-spinner Ekta Kapoor. 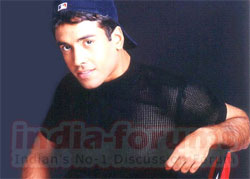 His character in the forthcoming "Aggar", directed by Anant Mahadevan, is also different. Tusshar plays a troubled man with shades of grey in the Shyam Bajaj production. "I play a media professional who loses his memory in an accident and is sent to an asylum. After he is treated and released, he tries to return to normal life but his past keeps interfering," Tusshar narrates enthusiastically. The film also gave the actor the chance to don different looks according to the state of mind the character is in. "In the beginning, I have an executive look, which is replaced by a crazed and unkempt look in the asylum. When I come out, I sport a rough, menacing look," Tusshar elaborates.

Known for his comedy roles, playing darker characters must be difficult for the introvert actor. Tusshar dismisses the perception saying: "What was challenging was shaking off my "Shootout At Lokhandwala" character and donning my "Aggar" character in a matter of hours. The other thing I found quite challenging was shooting "Aggar's" last part first. Our initial shooting was for the pre-climax scene where I drag Udita Goswami's character down the stairs." Tusshar found it hard to bring out the most intense facet of his character without doing any of the scenes that come before in the film. But the organized sets and focused cast and crew helped him pull it off. There was another scene in which Tusshar had to throw a stone at a television set while the camera was positioned behind it. "I had to be careful. Had I missed I would have broken the lens," the actor recalls.

But taking on negative roles do not mean that Tusshar has given up comedy for good. He would soon be seen in Priyadarshan's "Dhol", a story about four guys who have nothing better to do in life than chasing girls. The other comedy flicks lined up are sequels to "Golmaal" and "Kyaa Kool Hai Hum". While "Golmaal 2" is expected to roll in November, "Kyaa Kool Hai Hum 2" is still being scripted.

In real life, Tusshar has a balanced reputation of a good boy and a bad boy. "In school, I was a good boy and in college I was the opposite. I balanced both when I was in Michigan, US. So I have gone through both phases," he smiles mischievously. Hope in reel life too the actor gets to play diverse roles and display his real potential.
Shubha Iyer