Bollywood's glam doll Sameera Reddy is now well-placed in the ranks of serious actresses in Bengali cinema. Her stunning performance in her first Bengali film "Kaalpurush" earned her another movie with acclaimed director Buddhadeb Dasgupta, titled "Ami Yasim Arr Amar", and also Mira Nair's international project "The Migration". The actress talks about her career outside Bollywood, comparisons to Madhubala, JLo and Smita Patil, and her dream role. 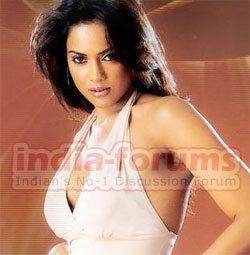 Featured Video
Q: Your last Bengali film "Kaalpurush" won a national award, how does it feel?
A: I feel glad and proud about it. To be honest, when I was doing the film, I never imagined that it would get a national award. So when it did, I was not just happy, I was also amused. I believe that we should work without expecting anything from it.

Q: How was the experience of working with Buddhadeb Dasgupta?
A: After having worked with him, I feel I have cleared a crucial examination of an acting school. It's every actor's dream to work with dada and I am lucky to have got the opportunity. He has taught me the minutest nuances of acting which I couldn't learn in Bollywood. This satisfaction is no less than an award for me.

Q: Did you take some training before getting into Bollywood?
A: No, I didn't. I have been a Kathak dancer and the classical dance form teaches you a lot more than just dancing. It's about dedication, discipline and commitment, which are very important in acting. In Bollywood, there are a lot of other things that are given more importance. Everything counts --- from your looks, to your dress and even your shoes. There are few films in which only you and your acting matters.

Q: Tell us something about your role in "Ami Yasim Arr Amar".
A: I play the character of Rekha, a girl from a small village called Parampur who comes to Kolkata to become an actress. Here she meets Prosenjeet who has loved actress Madhubala all his life till Rekha enters the scene. He falls in love with Rekha because he sees his ladylove in her.

Q: How did you feel being compared with Madhubala?
A: When I used to be a Kathak student, I used to get inspired by Madhubalaji and Meena Kumariji on screen. So, it's quite obvious that I feel glad when someone compares me with Madhubalaji. 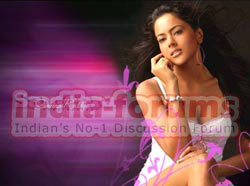 Q: Was "Ami Yasim" the dream role of your career?
A: My dream role would be the role in which I will be seen in a glamorous, yet simple character. For example, the role of Rekhaji in "Khoon Bhari Mang". If I do a glamorous role then I am tagged as a glamour doll and when I do a simple role people say that I am trying to hide my glamour doll image. So I want to do a role in which I can portray both.

Q: How do you divide your time between Hindi and Bengali cinema?
A: Currently, I am not just giving time to Hindi and Bengali cinema, I am also accommodating a Telugu film, a Tamil film, and Mira Nair's international venture in my schedule. I have already done three films in Telugu. I want to push my career in all regional film industries, except in Bhojpuri cinema.

Q: It's said that you replaced Mallika Sherawat in the movie "Race"…
A: It's even said that "Kaalpurush" was first offered to Bipasha Basu and I was given "Shikhar", but I did "Kaalpurush" and she did "Shikhar". So we replaced each other. Now the same way, I replaced Mallika in "Race", she replaced me in "Welcome". Such things are very common in the film industry today. But I have got no interest in snatching someone else's role.

Q: Do you feel you haven't got the place you deserve in Bollywood?
A: No one can claim that he/she has not got the position that he/she deserved. I know I am not chasing any dream. I want to go slow. I am satisfied with the fact that I am growing as an actor, I am getting better day by day. And I am very satisfied with it.

Q: How much competition is there between you and your sister?
A: There is no competition between us. I just compete with myself and fight with myself.

Q: Tell us something about your forthcoming films.
A: I just completed Abbas Mastan's "Race". It's a thriller and my character in the film is quite interesting. This film will get released during Diwali. One of my favourites is "123". I have never laughed as much as I did during the shooting of this film. Soon, I will also be seen in Mira Nair's "The Migration", a short film on the theme of AIDS. She offered me the work after watching "Kaalpurush" on DVD. So even for this role, I am thankful to Buddhadebji.