Ajay Devgn's latest directorial venture, Shivaay, is all set to release on the 28th of October. The trailer impressed many, especially since it had no dialogues and let the audience interpret the scenes with the help of the title track.  Directed, produced, and starring Ajay Devgn, the movie also has Sayyeshaa and Erika Kaar in the leading roles. 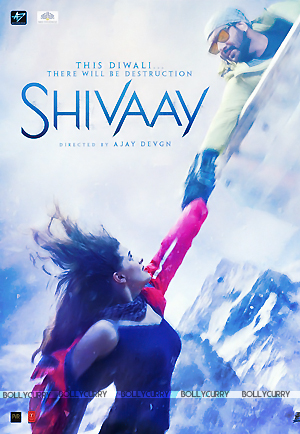 The album is short, but diverse. With tracks setting different moods to target different aspects of the movie, it is definitely an interesting one. The album has been composed by Mithoon, unless stated otherwise, who has been accompanied by popular and talented singers, such as: Arijit Singh, Badshah, Kailash Kher, Sunidhi Chauhan and others. Keep reading for BollyCurry's review of the album.
The album opens with the track "Bolo Har Har Har" by Mithoon. This song has been penned by Sandeep Shrivastava, and sung by the talented, Mohit Chauhan, Sukhwinder Singh, Megha Sriram Dalton and Anugrah. Though the lyrics were a bit difficult to comprehend, they spoke to the hearts of many music lovers.  Baadshah has voiced the rap portions of this song, which fits well with the rest of the classical over tunes. The music and lyrics were in sync, making it a perfect title track. This is definitely a rare song which has become quite popular amongst the youths.
The next track in the album is "Darkhaast", which seems to be a love track. A very romantic number sung by Arijit Singh and Sunidhi Chauhan, and worded by Sayeed Quadri, the combination of this duo voicing Quadri's lyrics makes one want to listen to it on repeat. The beats and the music are timed well with the lyrics. The verses are slow and soothing which seem to easily flow after the chorus. It is enhanced by energizing beats and tunes from the guitar.
Moving on to the next song in the album, we have "Raatein" which is a rare addition to Bollywood's list of songs. While we have many romantic and dance numbers, we don't find many dedicated to the father-daughter bond. This song, which is composed and sung by the immensely talented Jasleen Royal, who rose to instant fame with her previous hit numbers from Baar Baar Dekho (2016), "Nachde Ne Saare" and "Kho Gayye Hum Kahaan", is a refreshing change of pace. The lyrics were written by Aditya Sharma, and the music sets a rather pleasant mood for the listener.
"Tere Naal Ishqa", by Kailash Kher, is the next song in the album. Mithoon has weaved Quadri's lyrics to give a new song for all those who've loved and lost. Like every other one of Kher's songs, this track also boasts of his own trademark voice. The music is a fusion of Indian and Western, and complement one another to set the intended mood.
The album comes to a close with the reprised version of Jasleen Royal's "Raatein", which is very different from the original. The absence of music in the beginning of the song, combined with Royal's voice, sets a rather grim mood. As music sets in the song, however, the uninviting mood is only intensified. A very interesting number, this one's a must listen for all the Jasleen Royal fans!
Although the album is short, it does possess some really good songs that have captured the hearts of many music lovers. We, at BollyCurry, rate this album a 4 out of 5. We encourage you to check out the album on YouTube, or any of your favourite music streaming site. BollyCurry wishes Ajay Devgn and his team all the best for Shivaay, as it releases on the 28th of October.
Author: Lekha V.
Editors: Ritchelle C. and Mohini N.
Graphics: Aisha S.
Have a suggestion or comment for BollyCurry? Drop us a PM at  today!
0 Likes

Ramesh Taurani Spoke To Sushant a Day Before He Passed Away; ...
14 minutes ago