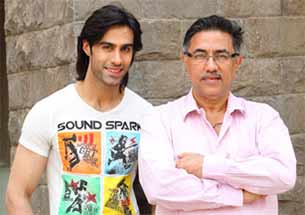 Filmmaker Suneel Darshan's son Shiv Darshan, who will make his Bollywood debut with "Karle Pyaar Karle" in 2014, credits his choice of an acting career to Akshay Kumar.

"I never wanted to be an actor, but one day when my dad was shooting for 'Talaash: The Hunt Begins...' (2003) with Akshay Kumar and Kareena Kapoor Akshay could not make it on the set as he was unwell, so my dad called me on the set for one shot on his place...That time I had a long hair and I had to cut it for that scene," Shiv told IANS.

"That is when I realised how much fun it is to be an actor...so in a way I am an actor only because of Akshay Kumar. I love being pampered on the set," he added.

Shiv says Akshay gave him a call after he watched the trailer of "Karle Pyaar Karle".

"Mr. Kumar called after he watched the promo of our film. He really liked it and he said his best wishes are with us."

The film is produced by the debutant's father under his banner Shree Krishna International.