Mumbai, Aug 25 (IANS) Producer Boney Kapoor, now making a film with Salman Khan in the lead, is shocked over the prospect of the actor serving five years in jail for hunting a chinkara deer. But he says he will not replace Salman.

Kapoor is producing 'Wanted Dead & Alive', a remake of Telugu blockbuster 'Pokhiri'. Salman has been shooting for it for a month.

'The sentence isn't a bolt from the blue,' says Boney. 'We went into it with our eyes open. I wanted only Salman for this role, and given a chance I'd still not change my decision to have him. He's my 4 a.m. friend. I remember how he stood by me when I was financially challenged during 'No Entry'.' 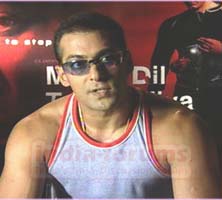 On Friday, a district and sessions court in Jodhpur issued an arrest warrant against the star after it dismissed his plea against a five-year jail term handed by a lower court.

Salman has been convicted of poaching a chinkara deer at Ghoda farm near Jodhpur on the night of Sep 28, 1998 while filming for Sooraj Barjatya's blockbuster 'Hum Saath Saath Hain'.

Kapoor, who was shooting 'Wanted Dead & Alive' in Hyderabad, says: 'We've been shooting since July 23. In all we've completed 25 percent of the film. We shot two songs in Thailand. In Hyderabad we've completed a large number of key scenes including the film's biggest action sequence. The next schedule is in October.'

And Kapoor, like all of Salman's well-wishers, has his fingers crossed.

'My director Prabhu Deva, Salman and I have had lots of fun shooting this film. Actually Prabhu and Salman go back a long way. Prabhu has choreographed many of his songs, and he has also choreographed some of my best numbers,' the producer said.

'He and Salman got along like a house on fire. Shooting with Salman is always exciting. There's never a dull moment,' he added.

As for the impending incarceration... 'These things happen. I won't let it bog me down. We all need to stand by Salman. I'm sure my film will be completed. But right now there're bigger issues...'