First thing first - the film lacks originality as several sequences are copied from the 1990s hit 'Dilwale Dulhania Le Jayenge'. From the rain song to the train scene, it reminds one of the Shah Rukh Khan and Kajol starrer. 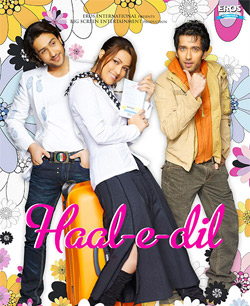 Although producer Kumar Mangat made 'Haal-e-Dil' to launch his daughter Amita Pathak, it is TV star Shekhar Suman's son Adhyayan who takes the cream out of the cake in this badly handled love story.

It is also Adhyayan's debut film, but his performance is being appreciated because of his originality. Usually new actors imitate big stars in some or the other way, but Adhyayan seems to be himself throughout the narration.

As a cute chocolate-boy hero, Nakuul might woo the college-goers, especially the girls. Amita's performance is tolerable, but she fails to strike a chemistry with either of her co-stars.

The three new faces provide freshness to this visually rich movie filmed exquisitely at stunning locales. Otherwise, there is nothing much to write home about this romantic saga.

The triangular love story revolves around Sanjana Sharma (Amita Pathak), Rohit (Adhyayan Suman) and Shekhar (Nakuul Mehta). Sanjana and Rohit study in the same college and are in love. Then Shekhar enters Sanjana's life. The two meet on a train and for Shekhar it is love at first sight. He starts following Sanjana and tries to woo her.

The script is weak and it drags. Despite the presence of Ajay Devgan, Kajol and Tanuja, the film fails to hold the viewers' attention.

One wonders why Kumar Mangat and Anil Devgan chose the two guys who look younger than Amita to play her love interest in the film?

Anil Devgan, who directed flops like 'Raju Chacha' and 'Blackmail', once again disappoints.