This month BollyCurry shines the spotlight on a true Bollywood star - an actress who has reveled under the arc lights from the tender age of thirteen, and a discovery of none other than the master filmmaker Satyajit Ray himself; and yes, we are talking about the enchanting dimpled beauty - Sharmila Tagore.
Tagore was born on 8 December 1944 in Hyderabad to an Assamese-Bengali couple. Her father was a relative of the 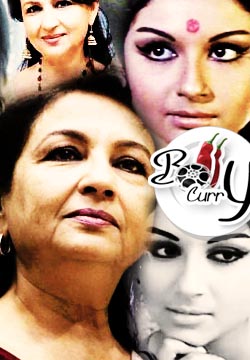 Nobel laureate and one of India's greatest writers - Rabindranath Tagore. She was spotted by Satyajit Ray during her school days and with her family's consent, made her debut in the final installment of the Apu trilogy - Apur Sansar (1959). Her wonder-filled eyes and the innocent mannerisms stayed with the audiences even long after her onscreen character suffered a premature death during child birth. She followed this up with a power-packed performance in Ray's next stint - Devi (1960) and after a few more performances in Bengali films, took the giant leap towards the Hindi film industry.
Kashmir ki Kali (1964) opposite the then-heartthrob Shammi Kapoor marked her debut into Bollywood. It turned out to be a commercial success and its songs were hummed by one and all. Tagore found her next big commercial hit once again opposite Kapoor in An Evening in Paris (1967), which saw her in a bold avatar. Her ultra-glamorous status was further cemented when she appeared on a Filmfare magazine cover in a bikini in the same year.
The scandals that erupted upon her wardrobe choices during the conservative times did little damage to her career, as she continued to be a part of mainstream as well as art-house cinemas. Then came Aradhana (1969), which was the biggest hit of her career, and made her and Rajesh Khanna everyone's favorite lead pair. The fact that Tagore had no qualms appearing in a non-glamorous role as an elderly widowed mother to Khanna in the second half of the film stands testament to the fact that she was the ultimate path-breaker. The role of Vandana saw her portray a young girl in love, who then faced numerous hardships and was finally reunited with her son after decades of separation. This performance of a lifetime fetched Tagore her first  Filmfare Best Actress Award.
The success of Aradhana saw Tagore being cast opposite Khanna for over 10 more films and this gave her some of the biggest hits of her career - Amar Prem (1972), Avishkaar (1974), Safar (1970), Daag (1973) and Choti Bahu (1971). Chupke Chupke (1975) opposite Dharmendra Singh Deol and Mausam (1975) opposite Sanjeev Kumar were other notable movies during this period, with her winning the National Award for Best Actress for the latter.
In 1969, at the height of her career, she tied the knot with Mansoor Ali Khan Pataudi, the Nawab of Pataudi and the then-captain of the Indian cricket team. This Bollywood-stardom-meets-sports-royalty power couple has had three children - actor Saif Ali Khan, jewelry designer Saba Ali Khan and actress Soha Ali Khan.
Tagore was one of the first established lead actresses from Bollywood to be a part of  a Television series in the form of Zindagi, which aired during the latter half of 80's and had a stellar cast including Urmila Matondkar, Supriya Pathak and Raza Murad. She forayed into regional and international cinemas as well and acted in a Hollywood movie by Mira Nair - Mississipi Masala (1991), wherein she shared screen space with Denzel Washington.
Tagore was chosen as the Goodwill Ambassador for UNICEF India in 2005 and she has also served as the Chairperson for  Indian Film Censor Board from 2004-2011. This living legend continues to receive accolades for her contribution to Indian cinema and was honored with an IIFA Award in the year 2011 and the Padma Bhushan award in the year 2013 for the same.
Did you know?
BollyCurry wishes the best for this graceful diva of Bollywood and hopes that she continues to live a life filled with abundant success and happiness.
Writer: Aishwarya S.
Editor: Pooja B. and  Gunia K.
Graphics: Komal P.
Do you have a suggestion or comment for BollyCurry? Drop us a PM at BC_Dropbox today.