View Profile
If we were to ask you to name an impressive character other than the leads from the film Guru, chances are high that you would say Arzan Contractor (the suave anglicised businessman in India who tries to stop Guru). The character has left an impact on all of us. The role was played by none other than the Punjabi hunk from Delhi - Arjan Bajwa.

Isn't it a strange way to spell Arjun, is the first question that you will have in mind. Ask Arjan and he will respond, "Arjan means to procure. Or you can also look at it as a typical Punjabi way to say Arjun!"

Arjan has been keeping pretty busy since his role in Guru won accolades from all quarters. However, his recent release Summer 2007 failed to create an impact at the box office. "The film has got good reviews but not done too well at the box office. I personally feel, Summer 2007 has suffered due to the poor promotion of this film. In today's market, a lot depends on how you market your film," says the actor who plays the role of Kabir in the film. 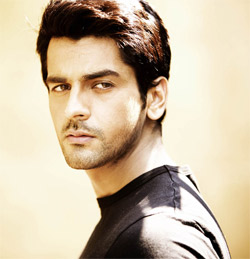 
"Kabir belongs to a rich family that owns vineyards. One day, he gets to know that all the riches accumulated by his family are through cheating people. And that is when his life takes a turn," explains Arjan, "This is not a love story and frankly I am quite happy at the way this movie has been getting good reviews."

Arjan's first venture in Bollywood was a little known film Woh Tera Naam Tha. "But I do not consider that as my debut, because I was very raw in the industry and went on taking wrong decisions. I consider Guru to be my first film," quips Arjan.

How did he bag the role in Guru? "Mani Ratnam personaly selected me for this role. Initially I was selected for Madhavan's role, but destiny had something else in mind," says Arjan who was shortlisted for Rang De Basanti and Gangstar, also.

"Whatever it is, I consider myelf extremely lucky to have played a role in Guru with such a big filmmaker. Though my screen time was not very high, most of it was with Abhishek Bachchan and it created a good impact," remembers Arjan who is also playing a key role in Madhur Bhandarkar's forthcoming film Fashion.

"This is one of the most awaited titles of 2008. I play the role of a model named Manav in the movie and Priyanka Chopra is paired opposite me. The highs and lows of the fashion industry have been brought out very well in the movie," describes Arjan.

The handsome hunk feels that Madhur Bhandarkar is one man who always comes up with thought-provoking films. "Consider Page 3, it was such a thought-provoking film. He is never afraid to take on unusual themes and has a very frank look at life. Most of his films mirror the contemporary society. Fashion will be no different. Shooting for the film is almost complete and just the dubbing is left. The film has good songs but even better background tracks," excitedly goes Arjan.

Arjan started his career with advertising for brands like Lux, Godrej AC, Fiat Palio, Raymonds etc. and soon he moved to films. He was also a Gladrags mega hunt runner-up (1998) and thus, one of the best choices to play this role in Madhur's Fashion.

"Madhur was quite impressed with my work and I am really honored the way Madhur Bhandarkar is praising me in front of other filmmakers. It is very encouraging for me," says Arjan who has acted in a few Telegu films as well. "I have played the lead role in Shrinivas Rao's Meetodukavali opposite Rimi Sen, and was also featured in Ravi Teja's Badhra, and Sampangi. South Indian films are quite rewarding," explains Arjan who is also doing a Tamil film titled Arundhati opposite Anushka.

"Although I would be interested in doing more roles down South, at present my focus is on Hindi cinema only," concludes Arjan. -Srabanti Chakrabarty