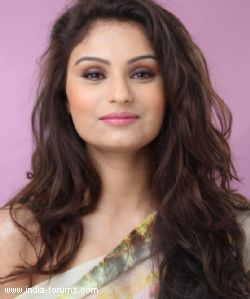 Dimpy Ganguly Mahajan needs no introduction after getting married to Rahul Mahajan on national television. She is all set to make her television debut in Sahara One's  Kahani Chandrakanta Ki.

According to our source, " Dimpy Ganguly Mahajan will play the character of Nagin Jwala, which was earlier played by Meghana Patel. The production house and the creative team have replaced Meghana and now Dimpy Mahajan will play that character. The track shifted to Virendra Singh and his past life and now the show will focus on how Naagin Jwala and Naag Jeevan take revenge from Daku Mangal Singh.

We contacted Santosh Shukla who confirmed the news, " Yes, Dimpy will play the character of Jwala and it is superb working with her. We shot a song sequence and it was great fun."

Dimpy has already started shooting and her entry will be soon telecast.

Jennifer Garner Shuts Down Pregnancy Rumors Speculation With One ...

LOVE_DMG 8 years ago man it is supring what pple can do for money and fam. if she really wants to become actor start like eveyone else right from the bottom. no need to married to stinkin rich donkey.
-guess will see her "acting" skills

-Nia04- 8 years ago i dont understand why people in industry encourage her!!
few months ago she had a miscarriage n was seen promoting some bengali movie of hers a week later!!gr8 way to get over a sorrow!!

SecretKhabri420 8 years ago ROFL =))... Dimpy to act? Waise she is nautanki but can't be a good actress... So much limelight for nothing...

Budtameez 8 years ago DIMPY MAHAJAN IS A 'NAUTANKI' BUT NOT A ACTOR!
#
Dimpy can't act but there again, TV serials don't require any acting skills...???
#
THE ONLY TIME DIMPY SHOWED ANY ACTING TALENT WAS WHEN IN A NEWS CONFERENCE DIMPY GOT ALL TEARFUL AND 'CLAIMED' THAT SHE WAS BEATEN UP BY RAHUL..LATER ON SHE WITHDREW THIS ALLEGATION! LOL..