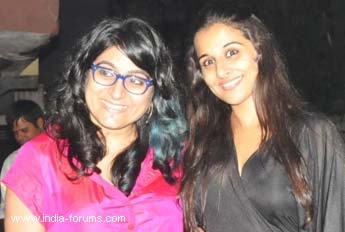 A tight budget, a difficult theme and a curvy actress to dress! Stylist Niharika Khan worked with all odds in "The Dirty Picture", but says her struggle to make Silk, played by Vidya Balan, look more silky than vulgar in the hit movie has paid rich dividends in the form of a National Award.

"I must admit that the feeling was overwhelming and it has not sunk in yet," Niharika told IAN in an interview.

"I would have liked to receive the National Award but I didn't think it would happen so soon in my career and definitely not for this film... now I have to do better and that leaves me very little scope for errors and misjudgements," said the designer, who is just five years in Bollywood.

If Vidya set a benchmark with her dare-bare act in Milan Luthria's directorial venture, Niharika too raised the bar by enhancing the curvy actress' sensuous retro look with her designs - which proves right her theory that fashion should suit the body.

"Designing for Vidya was refreshing. As a designer I always suggest that women need to be proud and happy for what they are and not for what they are not. And the acceptance of a full-figured woman in the days of size zero only further consolidates my belief that design and fashion are made to suit the body," she said.

"The movie had a script which was woman-oriented and a strong brief to support it. Yes, there were challenges within the period as the movie was a blend of south India for a north Indian audience. Also, there was a constrained budget to do work within, but things finally paid off," said Niharika, who is married to actor Ayub Khan.

It was 2007's period film "Khoya Khoya Chand" that marked her entry into the showbiz and in the short time since then she has done interesting films like musical "Rock On!!", romantic comedy "Band Baaja Baaraat" and adult comedy "Delhi Belly".

Thanks to the eclectic mix of projects, she has made a mark for herself with her quirky yet chic fashion sense. Having styled some of the leading actors, Niharika, however, feels a sense of style is missing in Bollywood.

"Most of the heroes and heroines in the past had a distinct sense of style, which is missing today. However, I am happy to say that we are seeing a renaissance of styling in Bollywood today and I am thrilled to be a part of it," she said.

What's next in your kitty?

"I am working on David Dhawan's 'Chashme Buddoor' and styling Arjun Rampal's look for Madhur Bhandarkar's 'Heroine'. Very soon I will start working for Abhishek Kapoor's film, a big screen adaptation of Chetan Bhagat's bestseller 'Three Mistakes of My Life'," she said.

Though she is enjoying her role as a stylist with films, Niharika restrains herself from participating in fashion weeks.

"I am not strictly a designer. I like dabbling with designs and storylines. I like to design for a purpose. A (fashion) designer does a collection normally; I do an assimilation of designs and that excites me," she said.

Bollywood designers like Manish Malhotra, Vikram Phadnis and Neeta Lulla often participate in fashion events, and Niharika said, "I am open to runway shows but not yet. I will build my body of work before I consider runways. But doing a line of clothing does excite me."