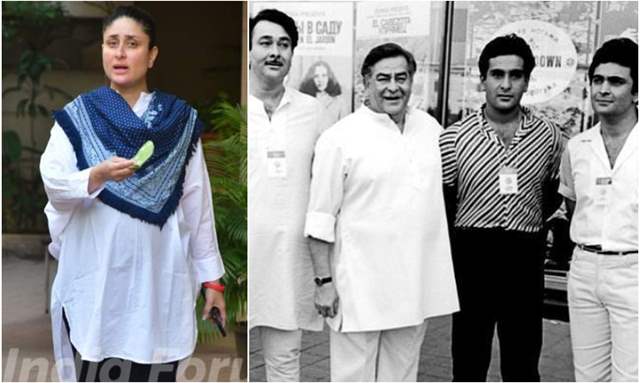 On Tuesday, Raj Kapoor's youngest son, Rajiv Kapoor, passed away after suffering a cardiac arrest at the age of 58. His sudden demise has left his family members shattered who are mourning the deep loss.

Rajiv’s elder brother and actor Randhir Kapoor was spotted at the Chembur hospital, where the actor was taken after he suffered the massive arrest. However, he was declared dead on arrival by the doctors. Randhir was seen breaking down in tears as he received his late brother’s body from the hospital.

The Kapoor sisters Kareena Kapoor Khan and Karisma Kapoor were also spotted in Bandra as they left to bid their final goodbye to their paternal uncle. And now, Kareena has expressed her grief on social media by sharing a throwback picture featuring the legendary Raj Kapoor with his three sons: Randhir Kapoor, late Rishi Kapoor and Rajiv Kapoor.

“Broken but strong”, Kareena wrote with a heartbroken emoji. Have a look:

Meanwhile, several members of the Kapoor family have arrived at the residence to pay their last respects to the deceased. Karisma Kapoor also reached the Kapoor residence with her mother Babita Kapoor. Other close friends and family from the industry including Aadar Jain, Tara Sutaria, Sanjay Kapoor, Chunky Pandey, Maheep Kapoor also arrived to give in their condolences to the family.