After the launch of two back-to-back fiction shows coming from YRF in Khotey Sikkey and Kismat, Sony Entertainment Television now gears up for the launch of a refreshing love story in Endemol India's Chhajje Chhajje Ka Pyaar. 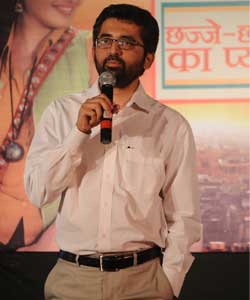 Here is Ajay Bhalwankar, Programming Head of Sony Entertainment Television in an exclusive conversation with TellyBuzz wherein he speaks about the new show Chhajje Chhajje Ka Pyaar, on the recently launched fiction shows on the channel and on the very strong weekend band that the channel caters to the viewers..

Can you tell us something about the concept of the new Sony show Chhajje Chhajje Ka Pyaar?
The show is about two families, the Tripathis and the Sehgals who have been living together for years as the tenant and the owner respectively. The live like a huge joint family who realize that they are tenants and the owners only in the beginning of every month. The show portrays the typical Delhi ambience where the viewers get to see their emotions related to the terrace in some or the other way. This is also a story of their kids, Ginny and Dhruv, who imbibe their values. A grave situation arises when the two fall in love, and decide to elope because of the differrences between the families. This is where the girl decides to bring in the families together and forgets the decision of eloping. They succeed in doing so and that's what the show is all about, the relations and values. The show portrays a huge middle class section of India who live happily under so much financial pressure.

What do you think is the USP of the show?
Like any other show of Sony, this is also very happy, positive and proactive. The show will definitely have drama but not on the basis of gun fight and atrocities. This show will showcase a drama which every family goes through, like the small problems that arise in marriages and issues about career. The show also deals with the issues of eldest possible generations to middle generations, to the younger generations to actually college going kids. We are trying to portray how Basu Chatterjee had tried to portray middle class stories in earlier days.

Can you tell us something about the cast of the show?
The cast includes Virender Saxena  and Kiran Kumar, Ritu Vij and many other experienced actors. We also have the lead cast Manish Tulsyani as Dhruv and Shambhavi Sharma as Ginny who are completely new and we are really fortunate to have them. Endemol has really auditioned for the characters extensively and they managed to get people from different corners of the country, for their auditions in Mumbai.

What made you choose a title like this?
The show is about community living and thankfully in India we have a great tradition of living together where the entire mohalla lives together. Their emotions are shared in all the circumstances and we are trying to bring about that in the show.

This is the first fiction show that Endemol is producing independently; what are your expectations from the house?
When we talk about Endemol, it is an internationally huge company and till now they have done shows with other production houses. But we believe in Endemol where they have a very good team with Gargi Malvankar, who has been in the house for a long time. We are very happy with whatever they have come up with so far and they are brilliant. And the best part is that the show is not yet another daily soap and their expertise of non-fiction has been really helping us to bring about something different.

What new does the show offer to the viewers?
Sony TV has been lately bringing different shows like Saas Bina Sasuraal wherein the girl goes to a house of men and has to eventually change brick and cement in the house. Krishnaben Khakhrawala tells the tale of a woman who is a survivor. This show is about an entire community and we are sure to bring in the difference that we have not seen on other GEC channels.

The promos look similar to the pre-launch promos of Yeh Pyaar Na Hoga Kam; how different is the story tackled?
I don't think that our show bears any resemblance to that show. Chhajje Chhajje Ka Pyaar is not a typical love story between a boy and a girl, but can be termed as a community's love story. It is about living together, and adjusting with each other living in the community.

Sony has always put up a right mix of experience as well as new faces in the recent fiction shows. Is this done on purpose?
We believe in getting good artistes and not just good looking faces for a show. At Sony, we want to get good actors and that's why we got people like Kiran Kumar and Virendra Saxena who are really brilliant actors. But considering the young audience, we want some fresh faces also because the concept in itself is fresh.

Baat Hamari Pakki Hai had had a good run, and is going to close at a point where it is doing well compared to the previous shows of Sony. Have you ever felt that the decision was a quick one where the show should have been given some more time?
The show is a yearlong show, and it's already completing a year. The story was coming to an end anyways, and we did not want to drag it.

Your last few fiction launches in Saas Bina Sasural and Krishnaben Khakrawala are doing well.
The big test for me and for Sony is its fiction band, and we have been very aggressive on the genre that we have launched of late. In the next six months we will have some rocking shows coming up.

The ratings of Khotey Sikkey have fallen in the second week after delivering an impressive pick in the first; what do you expect from the show?
That happens to any show and I just expect it to be better in the coming weeks.

What are your expectations from Kismat? How has the initial response been?
Kismat is a mammoth saga which is very interesting and is a differently done show. The scenes in itself are produced in an advanced way. YRF is definitely trying to bring in different ways of looking at fiction with their unique concepts.

Thrillers have always worked on Sony TV; can thrillers be tagged as a default hit for Sony?
Nothing is default for any channel and when we launched Adaalat, we were not very sure whether this kind of show will work or not, but then we decided to do it and fortunately it worked.

What is the main plan for Sony this year?
We aim to become the most impactful GEC.

ktms 9 years ago All your new shows are tanking big time.we viewers are very happy to see that.u deserve the last place on TRPs.

jassie_17 9 years ago ok,just let me stop you thr...if baat hamari pakki hai was coming to an end by nature,can't you just let it end when it's supposed to end???Why did you guys have to interfere???

RagSia 9 years ago proma seems promising hope thry live upto the expectations afterall we all like fresh, young romantic stories if presented well they are providing really good bunch of late a hearty thank u to them

chammak_challo 9 years ago BHPH hasn't even finished a whole year. Ankita & Barun's talent was used well during the first half but now it's being wasted on a useless track. So the decision to take the show off the channel was definitely a rash decision & it has not been given the respect it deserves to end the show the right way

momma1128 9 years ago Are you kidding? BHPH has not finished a year. It launched on May 31st. Does this man even watch the serials on his own channel? The decision to axe BHPH was RUSHED and what they have done to this serial is a disgrace.

izanami 9 years ago Completely flipping unfair, Sony. Why such an aggressive promotion for Chajje? You're even going to sacrifice BHPH's finale ep for it? At the very least, you could have spared that and given us fans a nice goodbye. Shame on you.

shrutireddygr8 9 years ago Looking forward to this wonderful show!!!