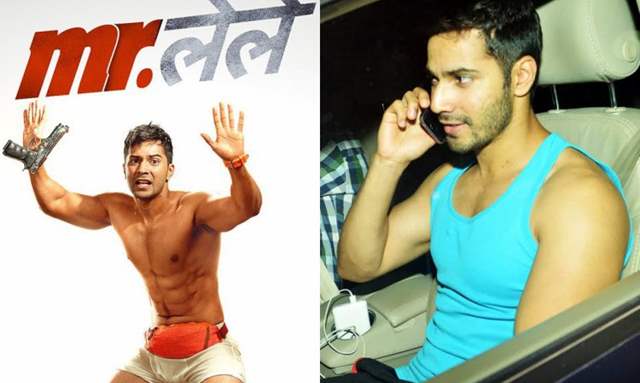 Just two days back, Karan Johar’s Dharma Productions announced the third collaboration between Varun Dhawan and Shashank Khaitan in the upcoming film titled Mr.Lele, after  Humpty Sharma Ki Dulhania and Badrinath Ki Dulhania, which were a hit at the box office.

The comedy thriller film features Varun Dhawan and Janhvi Kapoor and Bhumi Pednekar in lead roles after Kiara Advani walked out of the project citing date issues. The Badlapur actor had shared the first look of Mr.Lele on his social media and in no time, many B Town celebs like Arjun Kapoor, Shraddha Kapoor, Nora Fatehi, and others had hilarious reactions to his underwear look.

In a recent chat with Mumbai Mirror, Varun revealed that he had a bizarre reaction after reading the film’s script and had called Shashank Khaitan “109 times in two days”.

“Talks are on (for an action film), I’m looking to explore the comic thriller genre too in Mr. Lele. After reading the script, I called Shashank 109 times in two days” Varun told the daily.

Currently, Varun is gearing up for the release of upcoming dance film, Street Dancer 3D, that is scheduled to hit the theatres on 24 January 2020. Reacting to the news that producer Bhushan Kumar wants to spin Street Dancer 3D into a franchise, he confirmed: “There is an idea, but these films need to be done for the right reasons; like in this film, we dance for a cause. Remo keeps coming up with wonderful ideas and I’m sure after two dance films, Shraddha and I will do the next one together, with Nora joining the family too.”

VD is very fond of Salman Khan and he even stepped into the latter’s shoes with Judwaa 2, the reprised version of  David Dhawan’s 1995 hit Judwaa. Talking about working with Salman in a multi-hero film, he told the daily, “I have done them (two hero) already, from Dilwale to Dishoom and Kalank. You never know what can happen in the future. I’m ready to work Salman Bhai anytime.”

Varun has done a variety of films throughout the course of his career. He kick-started his journey in the movies with the 2012 buddy film, Student of the Year. He further went on to do films like  October, Badlapur, and Kalank. And now, on returning to the commercial masala genre of films, he says: “Yeah, I’m getting back to the commercial child-friendly genre. I want to do such films the minute I start missing them. The timing is right for us because January has several important films on serious issues. I love being an entertainer, and making people smile is a big deal with our family. My dad’s films have always spread happiness too.”

After Street Dancer 3D, Vaun has Coolie No 1 with Sara Ali Khan next on his list.