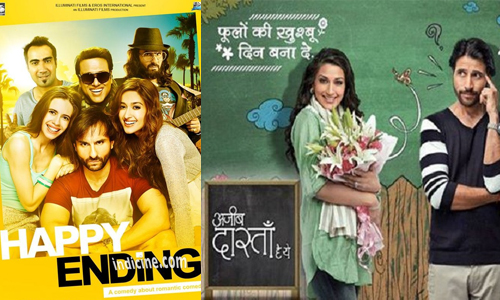 Balaji Telefilms' promising show Ajeeb Dastaan Hai Ye has picked up its right pace and is ruling the hearts of masses with its unique concept and the chemistry between Shobha (Sonali) and Vikram (Apurva Agnihotri).
Television is a big medium which has a wider reach and hence is becoming a vast platform for Bollywood actors to make their appearance on various shows. While many big and renowned celebs have shared screen space with these TV faces in shows like Ye Hai Mohabbatein, Kumkum Bhagya, CID, Comedy Nights with Kapil, yet again the cast of Happy Ending will be seen on Life OK's Ajeeb Dastaan Hai Ye to promote their film.
Says a source, "The cast of Happy Ending Saif Ali Khan, Ileana D'Cruz will make their presence in the show and some good moments will be seen between Vikram, Shobha, Ileana and Saif."
Well it will be amazing to watch an integration scene.
Phalguni Sharma

+ 2
6 years ago
Does everyone else thinks of Vinod and Preeti? &lt;3

6 years ago Thankgod stars r not coming to yeh hai mohabbatein they spoil the track..

AJeeb Dastan is a going good as well

+ 4
6 years ago Love the storyline, the pace and the performances of the awesome cast. Character sketch is amazing and overall a refreshing show! Ajeeb Dastaan Hai Yeh is as real as it can get! A Must watch for every woman!

+ 3
6 years ago Super exciting drama in Kumkum Bhagya cant wait for pragya to give it back! Sriti Jha and Shabbir Ahluwalia are phenomenal!

+ 3
6 years ago Lookin fwd to it !! Apurva as Vikram & Sonali as Shobha are brilliant the show is amazing crisp to the point & every episode brings new dynamics to be glued !!

AJeeb Dastan is a going good as well

+ 7
6 years ago Reading the title, I just thought they will be in Yeh Hai Mohabbatein. Thank God, cause these appearances ruins the episode. It's just waste of time.