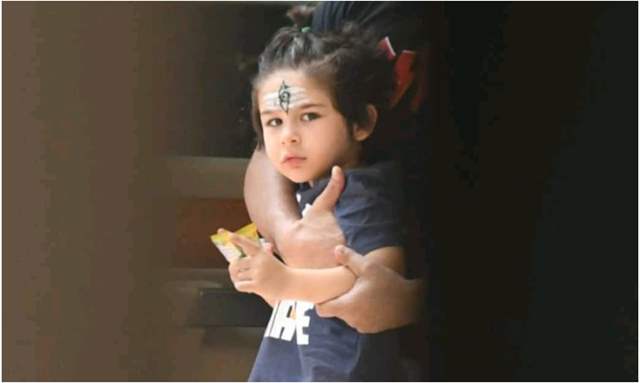 Kareena Kapoor Khan and Saif Ali Khan’s son Taimur Ali Khan is one of the internet’s youngest sensations and he is often spotted playing around at their residence in Bandra. The young star’s cute looks and adorable expressions manage to refresh the netizens mood.

Now, a new picture of Tim celebrating Maha Shivratri is going viral and fans are baffled by his makeover on the auspicious occasion. Taimur was clicked by the shutterbugs on Thursday, with the third eye of Lord Shiva, drawn on his forehead. Timur was seen dressed casually and his hair was tied in a little ponytail on top of his head.

The youngling has been on the paparazzi’s radar for quite some time now, and he has even managed to make it to social media without any official account. Taimur recently became a big brother as his parents Saif and Kareena welcomed their second son.

For some time now, Taimur has grown accustomed to the paparazzi clicking his pictures and he isn’t camera conscious anymore. Lately, he often poses for the cameras, however, when not in the mood he even asks the paparazzi to not click pictures.