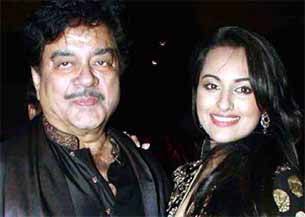 With former actor and BJP candidate Shatrughan Sinha facing a four-cornered contest for the Patna Sahib Lok Sabha seat, party workers and supporters say it will be great if his daughter, Bollywood actress Sonakshi Sinha, campaigns for him.

"Unlike last time, it is not going to be a cakewalk for Shatrughan. He should invite his daughter Sonakshi to campaign for him. Her star power will help him tide over the odds against him in the polls," said Bharatiya Janata Party worker Rupesh Kumar.

Mahesh Prasad, another BJP worker and fan of Shatrughan, said just a road show by Sonakshi for her father will change the situation in the sitting MP's favour.

"Her visit to the constituency is bound to change the equation," he said.

Fruit vendor Arjun Singh said Sonakshi Sinha was a big star, like her father was in the past.

"Her appeal will make a difference. We want Sonakshi to campaign for him," he said.

"It is a natural demand because star power matters. But for now, there is no such plan to invite her for campaigning," senior BJP leader Nand Kishore Yadav said.

Shatrughan's elder son Luv has been giving him company during the campaign.

Sonakshi has not been able to find time because of her shooting commitments but has taken to the social media for the purpose.

Sonakshi has seven million followers on Twitter to whom she has been sending messages in favour of her father, her mother Poonam Sinha said.

The Congress has fielded Bhojpuri superstar Kunal Singh and the Janata Dal-United a reputed doctor, Gopal Prasad Sinha. The Aam Aadmi Party's candidate is Perween Amanullah, a former minister and an RTI activist.