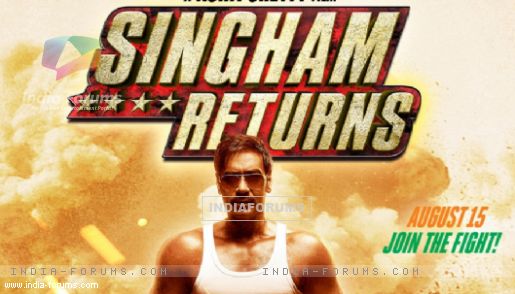 As expected, the action drama opened with a bumper and staggering figure of Rs 32.09 Crore making it Bollywood's highest opener ever surpassing many other blockbusters released so far, and Day 2 has an astounding opening of Rs 21.05 Crore took the collections beyond 50 Crores (RS 53.14 to be precise) in just 2 days!!! Continuing its splendid run at the box office on Day 3 aka Sunday as well with Rs 77.69 Crore  in total, and Rs 92.47 Crores for Day 4 in total, Singham Returns entered the 100 Crore club on Day 5 and is increasing by each day and has reached a total of Rs 107.39 Crore on Day 6!!

One of the most talked about films this year, Singham Returns has won critical as well as audience acclaim who have been queuing up to catch the movies at the cinema. in fact, Singham Returns had already crossed Rs 50 Crore collection in just 2 days, which makes it one of the fastest films to achieve this feat.

The Independence Day release has give the country a movie touched with patriotic and national flavor and highlighting the life of its civilians, a perfect family outing at the cinema celebrating 68 years of freedom!   Rohit Shetty has always entertained us with his films and he is back again taking the franchise several notches higher in every aspect of film making!

Well, the verdict is out!! A gripping story, high octane action, power packed performances by the cinema icons of the country and foot tapping music complemented with memorably cult dialogues, Singham Returns is the film to watch Book your tickets now!!