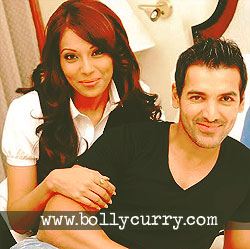 The past nine years have seen Bollywood's hottest couple, John and Bipasha, making it through various highs and lows together, despite numerous link-ups with other co-stars and rumors about breaking up. But they have remained steadfast and together, and that is, or should we say, was all that mattered.

However, it seems like the couple has reached the moment of 'agni pareeksha', with both John's and Bipasha's respective movies being released together on October 15.

With Ajay Devgan as the co-star, Bipasha's film Akrosh is based on the issue of honor killings taking place in  the state of Haryana. While the film was supposed to release two weeks ago, the date got delayed due to Ayodhya's verdict. Now, it's all set to release on the same date as John's upcoming film Jhoota Hi Sahi.

With both their movies releasing together on the same day, it seems that the two lovebirds will be facing some fierce competition. Bipasha even commented about the matter on her Twitter page and wishes that both films do well on the box office.

Though belonging to vastly different genres, we hope that the two movies do 'well' for the audiences. Here's wishing the couple good luck!!