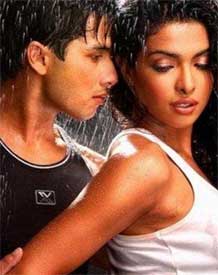 Really 'good friends' Shahid Kapoor and Priyanka Chopra are not on talking terms, but luck has played yet another game for them. Call it destiny or coincidence, but Shahid's upcoming release 'Chance Pe Dance', opposite Genelia D'Souza, has him using the same number for auditions as Priyanka Chopra used for Fashion.
The promos of 'Chance Pe Dance' have aired with the release of 'Kurbaan'. The most surprising aspect is that both of the movies, Madhur Bhandarkar's 'Fashion' that stared Priyanka Chopra, and Ken Ghosh's 'Chance Pe Dance', staring Shahid Kapoor, are produced by UTV Motion Pictures.
To top it all, the cell number displayed in both movies does not belong to either Shahid or Priyanka; rather, it belongs to Ram Mirchandani, who used to work with UTV, and is now working with someone else.
Much to Ram's disappointment, he is receiving numerous phone calls from Priyanka's fans, who assumed that the number Priyanka displayed in 'Fashion' was actually her phone number. Now, one can only wait and watch, to see if Ram will continue to receive double the number of phone calls he received during 'Fashion', when time comes for Shahid's 'Chance Pe Dance' to release.
Featured Video