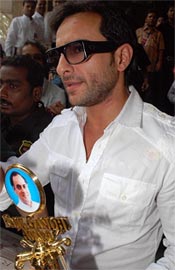 Mumbai, Aug 18 (IANS) Bollywood actors Saif Ali Khan and Lara Dutta have been given the 11th Rajiv Gandhi annual award for their contribution to Indian cinema, at a function attended by political stalwarts and Bollywood personalities.

'This is for the first time I have received an award which is not completely related to films,' said Saif after receiving the award Sunday from Maharashtra Chief Minister Vilasrao Deshmukh.

Lara Dutta thanked the jury members for selecting her for the prestigious award and said it was a great honour for her to receive the award.

She said, 'I have grown watching Rajiv Ji and have always admired him for his ideologies and vision. It's a great achievement to receive an award by his name.'

Deshmukh also honoured Padma Bhushan Baba Kalyani, Chairman of Kalyani Group for his outstanding contribution to the field of business.

Deshmukh also handed the award to journalist Vir Sanghvi for his contribution to the field of journalism.

'This award is special to me because of two reasons. First the award is in memory of a person
Featured Video 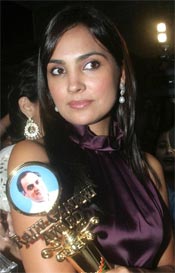 whom I admired because of his visionary power and secondly it has been awarded by Deshmukh Ji,' said Sanghvi while receiving the award.

Other personalities who received the award included Anna Hazare for social service, Mehul Choksi for innovative marketing, Sunny Varkey for education, Sameer Gehlaut as the young enterpreuner and Vandana Luthra as the Women Achiever.

Indian wrestler Dalip Singh Rana, popularly known as 'The Great Khali' was not present to receive his award for Super Achiever Wrestler.