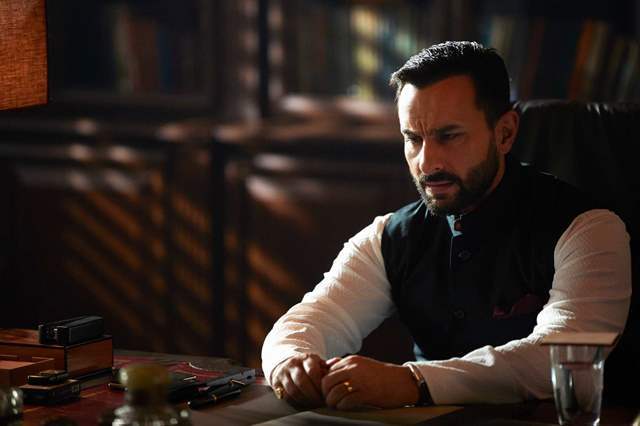 Saif Ali Khan's upcoming show Tandav is making a lot of noise. The show's trailer was revealed recently and it garnered a lot of positive response from everyone. The show was shot at his own ancestral palace in Pataudi and speaking about it, Saif has said that while he never allows film crews to shoot inside the property, he made an exception for Tandav.

Tandav is directed by Ali Abbas Zafar and stars Saif as an ambitious politician with his eyes at the Prime Minister's chair. He belongs to a family of powerful leaders, therefore a palace-like house was a necessary requirement.

Speaking to Mid-Day, Saif revealed how renting out the palace still makes him nervous.

I don’t mind giving it for shoots sometimes because it remains unused 340 days of the year. These days, film crews have become responsible and look after the venues, but [the idea of a shoot] still makes me nervous. Usually, I am more comfortable if they are filming around the exterior of the palace. But for Tandav, I made an exception [by shooting inside]. I think it is the palace that lends us the royal look. Anyone standing there would look royal.

Earlier, talking about the palace, Saif had said,

It’s impossible to put a value to it in monetary terms because emotionally, the property is priceless. My grandparents and father are buried there, there’s security, serenity and a spiritual connection there for me. The land goes back by a few centuries, but the palace that my grandfather built for my grandmother is around a hundred years old. He was the ruling monarch then, but since then, privy purses and titles have been abolished. These are different times which is why my father leased it out and Francis (Wacziarg) and Aman (Nath), who ran a hotel in the palace, took good care of the property and were like family. My mother (Sharmila Tagore) has a cottage there and she was always comfortable.

In another interview to Financial Times, Saif talked about how his own privileged upbringing meant that he was the right choice for his role in Tandav.

I have grown up in a very privileged section of New Delhi, I understand that. If you're asking me to play a privileged prince of a politician, a lot of that will come naturally to me because of the way I've been brought up . . . It's pretty good casting.