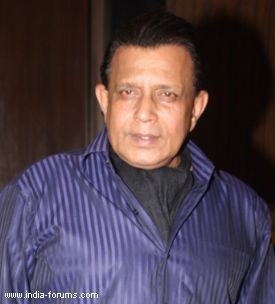 Actor Mithun Chakraborty, who has been nominated by the Trinamool Congress for a Rajya Sabha seat from West Bengal, doesn't believe he has the "traits of a politician". However, he is aware that his nomination cannot be treated as "ornamental".

Here are excerpts from an interview with the 61-year-old, who is Bollywood's original 'disco dancer':

A. I can't say that at all. You know me for so many years. Do I have the traits of a politician? No. This Rajya Sabha nomination is more for Didi (Mamata Bannerjee) than myself. I don't know if you know this, but ten years ago she had offered me a Rajya Sabha seat. At that time I had to say no to her because I just didn't have the time. Out of 365 days, I was working for 465 says (laughs). That didn't seem like the right time to take up such a big responsibility.

Q. So you see the Rajya Sabha nomination as a big responsibility?

A. Of course! I'm being given the job of looking after the welfare of people. A Rajya Sabha nomination should not be treated as ornamental. In any case, I don't take on any responsibility half-heartedly. I either do it with full sincerity or not at all.

Q. What made you change your mind about Mamataji's offer this time?

A. I told her to think it over, whether I'm capable of handling it or not. She told me to fill the Rajya Sabha papers while she thought it over. I did all the formalities. Then after Suchitra Sen's death, I was in Kolkata. That's when Didi told me that she had made up her mind about my capability. But do you know how I got to know I was selected for the Rajya Sabha?

A. I was at the Kolkata airport waiting for a flight when my daughter called to say Didi had already announced my nomination on Facebook.

Q. Mithunda, do you feel that now your life taken a swing away from acting?

A. Well, I'd like to say one thing very clearly. I am now two people. One is an actor and I'll never quit being an actor. As long as I get good roles I'll do them. If I take on bad roles my fans would be deeply offended. I've to play characters that justify my presence.

Q. And who is the other person that you've become now?

A. Yes, the second Mithun Chakraborty is the man who has been given this responsibility by Didi. Just as the characters I play have to justify my presence I've to make sure my role in the Rajya Sabha is not a letdown.

Q. Does the Rajya Sabha seat give you more scope for charitable work?

A. Yes, I want to carry my responsibility as a citizen forward by using the money that I get as a Rajya Sabha member to help the needy. I want to use the Rajya Sabha funds for the collective good. I want to make sure that the funds from the Rajya Sabha are put to optimum use. I will speak to Didi about this.

Q. Would you now cut down on your television appearances as reality-show judge?

A. No no. I remain committed to that. My fans want to see me on television.I can't let them down. Just as I've balanced many of my obligations in the past, I'll add Rajya Sabha to my many duties. Like I said, I am two Mithun Chakrabortys now.

Q. Which films are we going to see you in this year?

A. Subhash Ghai's 'Kaanchi' is coming. Then I've 'It's Entertainment' with Akshay Kumar. I'm also in Sajid Nadiadwala's 'Kick'. Then there's a big film called 'Bombay Fairytale' directed by Vibhu Puri. Then I'm doing two Bengali films. Actually it seems like a crowd of films because some projects got delayed.

A. Pray that I continue to do good work. I've never asked anyone for any favours. I hope to remain honest to myself in anything I do in life.