View Profile
Rajkumar Santoshi is known as one of the most versatile film-makers in Bollywood, with movies Featured Video
as diverse as the side-splitting "Andaz Apna Apna", the historic "The Legend of Bhagat Singh" and the hard-hitting "Lajja". "Family", "Khakee", "Pukar" and "China Gate" are some of his other creations. The ace director is now back with yet another thought-provoking subject in "Halla Bol", starring Ajay Devgan, Vidya Balan, Pankaj Kapoor and newcomer Ishteyak. Produced by Abdol Samee Siddiqui, the film shows a mirror to all those who have buried their conscience in the quest for fame and money.

"I have always followed my heart, instinct and conscience and made movies. I have made "Halla Bol" with great love and affection. The film is about how we all can make a vital difference to the society, and how each of us should be ready to attack wrongdoings with our collective spirit. It is only through such change in thought and actions can we better the society," says Santoshi.

The story of "Halla Bol" revolves around its central character Sameer Khan (Ajay Devgan), a small-town youngster who aspires to become an actor. In a short span of time, he goes on to become the most sought-after action hero of Bollywood. But the quick success spoils Sameer, he forgets his modesty and humbleness, and his reality gets lost in the mire of his roles. He ends up with a reputation of an unprincipled actor and a dishonest man.

One day, Sameer witnesses a murder. The incident rips off his inhumane mask and stirs his conscience back to life. While all the witnesses of the high-profile murder turn hostile and defer from their statements, Sameer decides to divulge the truth in the court. In the process, though, he makes many enemies. The basic plot of the story is inspired by the infamous Jessica Lal murder case.

Director Santoshi, however, dismisses rumours that the film has been inspired by murdered theatre activist Safdar Hashmi. "Not directly. This is a parallel. My film is in no way inspired or based on Safdar Hashmi's life. "Halla Bol" means attack and the film says that one must not take injustice lying down. I am not advocating violence in my film, but talking about raising our voices against injustice," clarifies Santoshi

The film finds Ajay Devgan team up once again with Santoshi after "Khakee" (2004), "The Legend of Bhagat Singh" (2002) and "Lajja" (2001). "Ajay is very versatile. The character required no stylized performance or a put-on. I wanted to depict the star in a candid manner and Ajay hasn't let me down," says Santoshi. "Unfortunately, mainstream films have not tapped Ajay's talent properly. It is quite thrilling to see his histrionics slowly unfolding up in layers, film after film. He is a star performer on Indian celluloid," he adds. 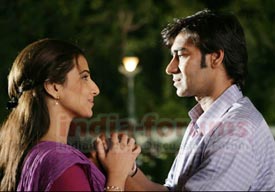 Interestingly, this will be the first time that Ajay is paired with Vidya. The music of the film has been composed by singer-turned-actor Himesh Reshammiya. Kareena Kapoor too makes a small appearance in the footage from "Omkara".

"Vidya has a very responsible role in the film. Her transformation from the small-town girl who loves a struggling actor to the woman who is a successful star's wife, and her strife and how she confronts him with moral ethics is a remarkable graph of Vidya's character. She has played it with aplomb," praises Santoshi.

Vidya, too, is all praise for the veteran director. "Getting a chance to work under Rajji so early in my career is a treat for me. I have learnt a lot of things from him. He doubles as a teacher for every newcomer," avers Vidya.

Pankaj Kapoor plays the role of a reformed dacoit in the film, who takes to street theatre to bring about a change in the society. Apparently, Pankaj didn't shave for three months to grow a beard and give his character a realistic look. "Yes, I didn't have a shave for three months. As an actor, I am not comfortable with an artificial beard. The character had to look authentic, real and a little menacing. So I grew the beard as I felt the need to, as an actor," clarifies Pankaj.

While Santoshi just had to direct the adults on the sets, there was a six-year-old whom he had to coax and plead with for performing his part. In a particular scene, the kid playing the role of Vidya Balan's son, refused to cry. "Instead of getting frustrated, Rajji came up with a plan. He purposely started hitting one of his assistants. Seeing this, the frightened kid started crying and hence, the shot was taken," recalls Vidya.

Once "Halla Bol" hits the cinema theaters, next on Santoshi's mind is his forthcoming Ramayana. Earlier, he had also announced making a version of Mahabharata in two parts and had even created its sets at Ramoji Studio, but the project fell through. "Ramayana is on in full swing. We are shooting next May and it will be completed in a year's time. I had dropped Mahabharata as it was not feasible. Ramayana is more apt for the Indian audience. Once I make Ramayana, may be I will get back to making Mahabharata," says Santoshi.

Despite a big star cast and having shot in 65 locations, "Halla Bol" was completed in a mere 75 days. Going by his experience and efficiency, chances are we might see Santoshi's Mahabharata rolling very soon.