Featured Video
Niraj Mancchanda has become a brand in numerology and graphology amongst the entertainment industry. How you feel about it?

It was a hobby, which turned into a profession and I am glad I made it into this profession because it’s not only about me making money but also about helping others with what they want to do in life.

What attracted you towards this career? And when did you begin with it?

As I said it was a hobby. I was fat and lazy and I wanted to lose weight. I did not know how to though because I hated going to the gym and then a friend of mine told me that “the way you think is the way you write and this science is called graphology”. Thus I decided to read a book of graphology and it seemed to be so true. Slowly I started changing my handwriting and I could see a change in myself and that is how I got interested in graphology.

How was your initial experience with numerology and graphology as a career, when it was not that popular?

When I started with graphology as a career it was reaching its popularity. The first film I titled was “Krrish” and I was the first person who collected signatures of all the actors from Amitabh, Shahrukh, Aamir and Hrithik! On 27th February 2005 an article had been done in The Bombay Times and that is when I started becoming even more popular as the moment you attach celebrities to your work, everyone wants to read about it.


Tell us something about your experience with Bollywood? Good? Bad?

I have met people who believe in the sciences and want to consult you and then those who also want to hide it. Many a times I have people telling me please don't tell anyone I consulted you. Bollywood folks are very insecure about themselves as they are not sure about what will work and what will not work and the level of confidence is quite low amongst many. There aren't many people like Govinda, Ekta Kapoor, and Himesh Reshammiya who openly declare that they do consult. I feel there is a generation gap as Ekta's generation tends to consult and also declare positively while today's generation has a negative attitude about it. They want to consult but not let anyone know! Look at Preity Zinta who recently during the IPL matches claimed in DNA that her astrologer said that she won't win a team in IPL and she did, so she really don't believe in the astrology." Then why does she wear a yellow sapphire? There are many insecurities amongst the people B-Town as if consulting towards astrology, numerology or graphology is something negative. 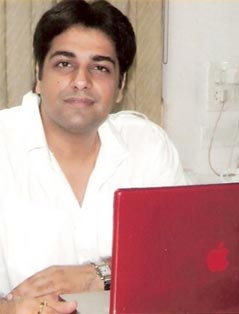 Your rapport with the bollywood people is limited only to professional parameters or its even beyond?

Both as with some I am very close but with others its strictly professional!

You are the reason for the success and happiness of many people. Is there anyone behind you?

My “Guru Nanak Dev” is behind me because I used to go to Gurudwara everyday and He got me into this profession. I mean my career started after I started going to the Gurudwara in 2004 and that is the year when I started my career. Everywhere you will always see that above my name will be His snap. I believe in "Guru Nanak Dev" and because of him I became a numerologist!


What do you suggest to people apart from numerology & graphology in order to improve their life?

First of all is your name correction and your signature correction are important. If you have a personality problem, it comes in your handwriting! Apart from that if anyone wants to know predictions then we check through astrology and horoscopes and if things are still not going right then a Puja can be performed to improve things!