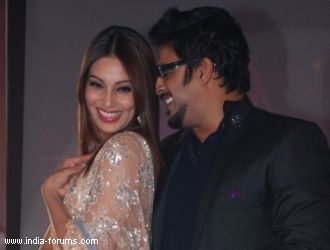 Lauding Bipasha Basu as one of the most outstanding and rewarding actresses he has worked with, Bollywood actor R. Madhavan Sunday said it has been a privilege to work with the dusky beauty.

"She is one of the most outstanding and rewarding co-stars I have ever worked with. Bipasha is a heroine who is involved in all creative aspects of the film,"

"It has been a privilege to work with a heroine like her who have never made anybody wait for her on the sets. Bipasha has never been late on the sets," said Madhavan who was in the city to promote 'Jodi Breakers'.

The film, directed by Ashwini Chaudhary and set to release Feb 24, is a wicked romantic comedy.

Madhavan plays the role of Sid, who along with Bipasaha, is a 'Jodi Breakers' - helping people who want to break their marriages and start a new life.

Bipasha said that the song titled 'Bipasha' is one of the favorite songs of her four-year-old niece.

"I never expected a song after my name. And it is really good that the Song has been a hit. My four-year old niece dances whenever the song is played. It is sign of the song being a hit," she said.