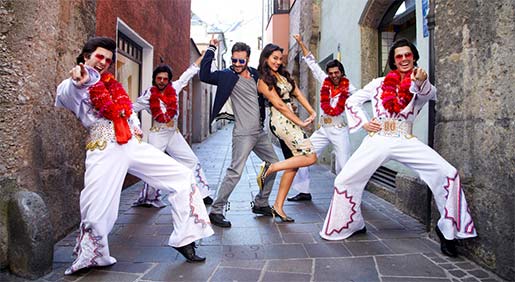 The makers of Action Jackson have recently unveiled the trailer and the audiences have absolutely loved the new chiseled avatar of Ajay Devgn making it one of the most anticipated movies of 2014!

The trailer looks like a complete masala entertainer, right from high dose of action, dialogues, dance and drama which makes it a complete out and out Prabhudheva directorial venture!

Well, what we hear is that the choreographer turned director Prabhu Deva along with the superstar Ajay Devgn, have taken special inspiration from the King of rock & roll, Elvis Presley for the song 'Keeda' from Action Jackson which was shot in Austria!!

The first thing that comes to one's mind when you hear of Elvis Presley is his white and red bellbottom jumpsuit, tip top shoes and a killer hairstyle! This classic Elvis Presley costume has been donned by the background dancers in the song throughout.

"Elvis Presley is an Icon. Prabhu sir and Ajay Sir are huge fans of Elvis Presley; hence they took inspiration from him for the costumes of the background dancers. They have been dressed just like Elvis Presley and will be seen doing some signature moves of the legend," says a source close from the production team.

Well, get set to groove to the song as it comes out today!!
0 Likes