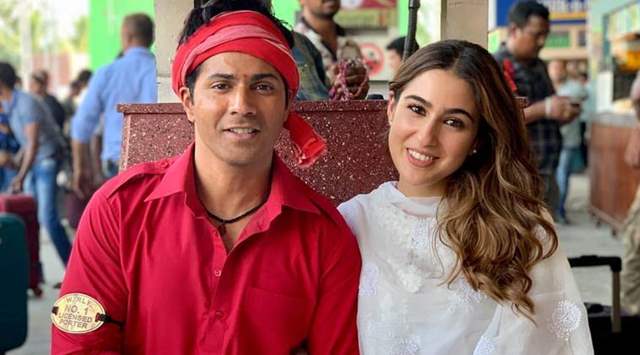 Due to the lockdown imposed in the nation because of the coronavirus pandemic, many films have opted for a direct digital release on OTT platforms. Amitabh Bachchan and Ayushmann Khurrana's Gulabo Sitabo was the first film to mark its release on the OTT platform followed by Vidya Balan's Shakuntala Devi. Akshay Kumar and Kiara Advani starrer Laxmmi Bomb, Alia Bhatt-Sanjay Dutt’s Sadak 2, Ajay Devgn’s Bhuj, and many others will now see a digital release.

The latest one to join the bandwagon is reported to be Varun Dhawan and Sara Ali Khan’s comedy-drama Coolie No 1. As per a report in Bollywood Hungama, the makers have opted for a digital release and are keen on releasing the film on Diwali 2020.

The portal quoted a source as saying: “After Laxmmi Bomb and Bhuj, it’s Coolie No. 1 that has fetched the maximum money, reconsolidating Varun Dhawan’s star power and the film’s anticipation among the audience. It’s a shocking decision, but the team was left with no other option as the future of cinema halls looks bleak at the moment.”

Meanwhile, netizens have reacted to this news and already started tweeting about boycotting the film.

After Sadak 2, Varun and Sara’s Coolie No 1 has come under the radar of the netizens who are gearing up to boycott the film as they call the film a product of nepotism. A Twitter user wrote: “#CoolieNo1 set to release soon & @Varun_dvn jumped in SSR case & tweeted for CBI. Boycott Coolie No. 1”, while another commented: “#sadak2 done now it's time for #CoolieNo1 are you guys ready to roar.”

“#nepotisminbollywood Dear Bollywood we don't really need this movie. The audiences are smarter right now, this is just another crap remake of the nepotism baggage #boycott #CoolieNo1” read another tweet.

Earlier it was reported that filmmaker David Dhawan had received many offers from the OTT platforms, however, he was ardent for a theatrical release for Coolie No 1. It was also reported that the makers had picked a New Year’s release date,  January 1, 2021, to showcase the film in theatres.

However, looks like the makers will have to make do with a digital release owing to the current scenario.

Speaking of Coolie No 1,  the film is a remake of 1995 Govinda and Karisma Kapoor starrer and features Varun Dhawan and Sara Ali Khan together for the first time on screen. It also stars Jaaved Jaaferi, Paresh Rawal, Rajpal Yadav, Shikha Talsania. Earlier, it was scheduled to release on May 1, 2020, but was postponed in the wake of the Coronavirus outburst in the nation.