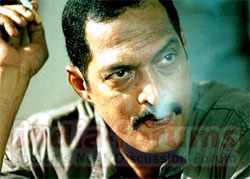 Nana Patekar and surprises go hand in hand. The versatile actor is all set to play a truck driver in a Rajkumar Santoshi production.

The film, a comedy entitled 'Horn Ok', will be directed by Rakesh Sarang.

'Nana excels in comedy. He was the first and last choice for the trucker's role,' said a source from the film.

Santoshi, who's busy with the post-production of Ajay Devgan-Pankaj Kapur-starrer 'Halla Bol', is determined to give outside directors a chance. The pre-production work of his 'Ramayana' epic, which has Ajay as Rama, Kajol as Sita, Riteish Deshmukh as Laxman and Prakash Raj as Ravan, is also keeping the director busy these days.

Cameraman-turned director Sarang has done commendable work on television so far. He has directed serials like 'Aashirwaad', 'Abhimaan' and 'Kartavya'. This would be his first feature film and a road movie at that.