The upcoming monster thriller and science-fiction flick, Creature 3D, is expected to hit screens this weekend. The movie stars our very own sexy Bipasha Basu alongside Pakistani actor Imran Abbas Naqvi, who's debuting in Bollywood with this movie. The mythical thriller is directed by Vikram Bhatt and is produced by Bhusan and Krishan Kumar under the T-Series banner. The movie is releasing solely in 3D, leaving the audience ecstatic of watching the thriller with double the fear. BollyCurry brings you Creature 3D's much awaited music review, just in time before it's release. 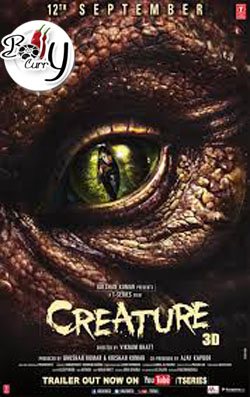 The album opens with the title song of the movie "Sawan Aaya Hai". The track is composed and penned down by Tony Kakkar, and the voice behind the mike is none other than that of Arijit Singh, who with his soft yet melodious voice he wins you over. This song is definitely tailor made for Arijit as he sinks deep into the song. The orchestra is a beautiful addition; especially the portion with the flute, which takes the song a notch higher. With this, Tony Kakkar takes you back to the 90s, the time of Nadeem-Shravan's compositions. I suggest that you should not miss out on this track, whatsoever!


The song has two more versions to the original, a remix and an unplugged number, also by Tony Kakkar. While the remixed version is an average with nothing more to offer than the original, the unplugged version is an unsuccessful try, and pales in comparison to Arijit's original track.
Next up is "Hum Na Rahe Hum", sung by the very talented Benny Dayal and composed by the music maestro, Mithoon. Mithoon takes the spotlight early in the song, with his supreme composition. Although Benny does a good job with the song as well, although the "IT" feeling remains missing. That being said, the remix version is a smooth addition with more of a club and dance-oriented tune.
"Naam-e-Wafa" sung by Farhan Saeed and Tulsi Kumar is another hit in the album. Mithoon composes the music, and he strikes yet again, with a lovely composition, and strong vocals that are sure to tug at your heart. The vocals of Farhan and Tulsi seem almost unplugged, conveying many emotions alongside. Once again, there is a remixed version of the song, which is upbeat, fast and gives the song a push, making it as appealing as the original.
Mithoon's "Ik Pal Yahi" is a passable song among the others. With the typical feel of a Bhatt movie, the setting, the lyrics and the rock. The only highlight of the song is Saim Bhatt's fresh vocals as he does complete justice to the song. However, there's no other factor that makes the song stand out and I'd personally give it a pass.
The albums wraps up with "Mehboob Ki" a song written, composed and sung by Mithoon. The song is light, fun and instantly gets you hooked on. It may not be the best song of the album, but it's a fairly nice rhythmic song with soothes your ears. Mithoon has excelled in all three departments, making the song worth listening to, at least once.
All in all the album lives up to the expectations of having chartbuster songs, which are high on melodies and vocals. Outstanding numbers such as; "Sawan Aya Hai", "Hum Na Rahe Hum" and "Naam E Wafa", make the album promising. Before bidding adieu, BollyCurry wishes the entire team of Creature 3D all the luck for its success, and hopes that the movie is as tasteful as its music. So don't forget to catch a scare at the theatre nearest to you on 12th September, 2014.
Author: Fatima W.
Editor: Sonia R.
Graphics: Shikha A. and Sonia R.
0 Likes

Tulsi Kumar Celebrates Diwali with orphan kids at an NGO