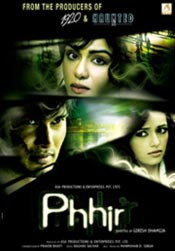 It's a known fact, the Bhatt camp doesn't believe in working with extremely popular celebrities and making big budget extravaganzas like most of the film-makers of today's time. In fact, Vikram Bhatt is one of the very few directors to introduce and encourage fresh talent; from Emraan Hashmi and Sushmita Sen to Rajneesh Duggal, Adah Sharma and now Roshni Chopra. However, unlike 1920 where he gave Rajneesh and Adah a fantastic debut, Phirr is not his directorial venture, it's directed by Girish Dhamija whose only previous film was the box-office dud Yakeen in 2005. So a one-film old director after a forgettable debut film casts two one-film old actors and a decently popular television actress for his second film, one of the only selling points being the 'Vikram Bhatt' name attached to it, and releases it against the biggie Aarakshan which not only boasts off a renowned director but also some of Bollywood's most popular celebrities of all time, from the older lot to the younger ones. Basically, the question is… can it work? Highly doubtful!

Kabir Malhotra (Rajneesh Duggal), a doctor with a good upbringing and a mind of his own marries Sia (Roshni Chopra) for love. A budding career and a seemingly happy marriage - what more could a man ask for? One day Sia disappears without a word. Disha (Adah Sharma) helps Rajneesh with clues that take him closer to unravel the mystery of his missing wife. But as they dig more and more they get their hands dirty. What has Disha seen? What has caused Sia to go amiss? As the plot thickens, all questions are answered. The future is nothing but the past again... that's Phhir for you.

Rajneesh Duggal says in one of his interviews, "Phirr will be one of the best thrillers you see this year." Well, let's get one thing straight, Phirr is no extraordinary affair. It does have a constant suspense and mystery attached to it. In fact, there are two of them! The problem is that both don't work! They are not only extremely predictable but also has a very been-there-seen-that feeling attached to it. The film starts off on a very mysterious note maintaining the interest and curiosity factor throughout the first half. It's interesting to see how the film unfolds scene by scene. But the latter part of the film ruins it all. After maintaining a constant pace; the film gets a tad little slow in the post-interval portions with Adah Sharma sulking at different locations. Plus it doesn't only get very predictable, as mentioned, but also gets very typical Bollywoodish and not in the good way. For example, you see Rajneesh Duggal fighting off some 10 men running towards Adah to save her screaming out "Dishaaa". Are you serious?! After saving her, he again starts fighting all the bad men, emerging out victorious of course. It got me the 90's feeling all over again. Also, the end of the film couldn't get more Bollywood. Not wanting to spoil the fun, if any, but why do our films have to end with people falling in love?!

Director Girish Dhamija has done an okay job. Some scenes are done well, for instance the transition of scenes showing incidents happening at the same time. However, the dialogues done by him are typical and ordinary. The screenplay by Vikram Bhatt is actually the best part of the film. Thankfully, it has been kept short and tight. The film doesn't get too stretchy barring the post-interval sequence. The editing by Manish More is commendable too. The music doesn't impress at all. The cinematography by Praveen Bhatt is reasonably good. Mainly, it's the story which falters.

Rajneesh Duggal is a confident performer. Breaking the 'models can't give expressions' norm, this is one model who does not only give intelligent expressions but also has the ability to move you with his performance. Being one-film old, he might not be fantastic, but he's good. Given a chance, he can emerge out as a fantastic talent. Well, he's been reportedly cast opposite Karisma Kapoor in her comeback film directed by Vikram Bhatt, that's a good chance there boy. Don't waste it! Adah Sharma is another underrated talent. Being a sensible performer, she gets the nuances of the character right. Though, she needs to brush up on the emotional scenes. She also needs to tone down a few pounds if she wants to give the sizzling heroines some good competition. Her costumes and hairdo in the film are also kind of hideous at times. What's with that cap and weird hairstyle? She particularly couldn't carry it off. And adding to the list is Bollywood debutante Roshni Chopra, an experienced decently popular television actress. Well, the experience doesn't show in the first 30 minutes of the film at least where she looks and sounds irritatingly fake. She gets better in the latter half leaving a decent impact. But overall, she doesn't get much scope. Most of the time, she's lost in the film. Parag Tyagi as the inspector is natural. Mohan Agashe doesn't get much to do; he's good in his bit.

To sum it up, Phirr gets you curious and interested but falters at the core point – the suspense. After an interesting first half, the second half of the film is a complete let-down with some ridiculously Bollywoodish scenes and uninteresting revelations. Lacking an attractive star-cast and any popular music, the film could mainly only rely upon its content. However, that doesn't seem possible. Watch it at home, if you have to!

Parag Tyagi roped in for Naagin 5?