Kareena Kapoor, who has received as many as four awards in just one month, says plans of her marriage to Saif Ali Khan may not happen for at least two years as her career is going great guns.

'It won't happen for the next two years for sure. Am I crazy to get married now when so many wonderful things are happening to my career? Saif himself is ultra-busy trying to set up his production house. Marriage can wait. I'm just happy to have him by my side. I've got the best guy any girl can ever have. 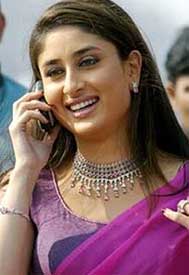 Featured Video
'Right now I'm so busy I don't have time to sleep properly. I haven't even had time to move into my new house,' Kareena told IANS in an interview.

Overwhelmed after receiving four awards, she said: 'Who doesn't like attention, recognition and awards? I've got four awards in a month beginning with the environment award I got from Erin Brockovich, then two youth icon awards from Rotary International and Stardust. And now on Tuesday I was honoured by FICCI which Yash Chopra gave to me.

'My mother gets exasperated each time I bring home another trophy. Saif wants to know where I'm going to keep all of them. I've set aside a whole enclave for trophies and awards. I love looking at them. One day my children are going to look at them and be proud of me.'

Now, after a long time, Kareena will be in Mumbai for a month. 'I've a month-long schedule of Rensil (D'Silva's) film coming up in Mumbai.'

Saif and Kareena returned home to Mumbai this week from Delhi without completing the shooting for D'Silva's film.

We never expected such crowds. They were everywhere. And it was impossible to shoot,' she says, sounding not the least put off. 'Those people who love me out there keep me going. I love my fans and awards.'

And now Delhi will have to be fudged in the Mumbai schedule of D'Silva's film.

The extent of the surging crowds in Delhi in the key shooting spots like Jama Masjid and Janpath for D'Silva's untitled film was so huge and unmanageable that the unit has returned without shooting the required sequences.

Back in Mumbai after a week of futile shooting, Kareena says: 'Everywhere we went there were these huge numbers of people who had come to see Saif and me. They were very sweet, very well-behaved. But unfortunately the number of people in key places like Jama Masjid and Janpath was always too high to shoot properly.'

As a result, there was almost no shooting.

'We did can some shots. But it was impossible to shoot with wide-angle lenses because the crowds were everywhere. We'll now have to recreate some of the Delhi sequences in Mumbai.'

Kareena is certainly not unhappy about the attention she got in Delhi. 'The people in Delhi were so warm. It just made me realise how much of a responsibility I have towards my audience. At this stage of my career I'd rather take another holiday than do a bad film.'