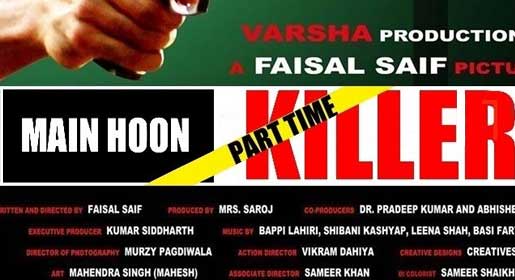 The release date of filmmaker Faisal Saif's comedy spoof "Main Hoon (Part-Time) Killer", earlier titled "Main Hoon Rajinikanth", has been pushed forward from April 24 to a new date, which is yet to be locked.

It is the same movie against the release of which superstar Rajinikanth had petitioned the Madras High Court for a stay last year, as he had felt the entertainer might defame him and upset his large fan base.

Now, the Madras High Court is said to have instructed the Central Board of Film Certification (CBFC) to recensor the film and issue a new certificate the makers in 10 days.

The film's director says, "the scenes in which there were 'direct' references to superstar Rajinikanth or his family were asked to be chopped off".

"I didn't have any problems or issues on it because I had promised I will not hurt the superstar anymore. After deleting those objectionable scenes, my film still looks the same... the idea is the same to make people laugh and entertain," Saif told IANS.

"We were planning to release the film on April 24 but we have now pushed it a little further. We are fully preparing ourselves for mid-May release," he added.