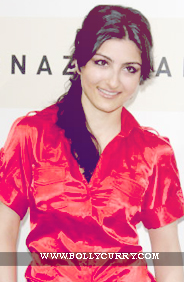 er failing to garner attention with her first few films, Saif Ali Khan's sister, Soha Ali Khan has turned her focus to her part in a British-Asian movie called Life Goes On.

Soha feels that being in this film has given her tremendous amounts of learning experiences. While she accepts regular Bollywood films are more dramatic than the Western films, she is looking forward to the challenge it presents and to working with stars such as Om Puri, Girish Karnad and her mother, Sharmila Tagore. The film is being directed by Sangeeta Dutta.

Soha has a few Bollywood films in the line as well, but nothing of note.

We wish Soha all the best with her new projects!
Editor(s): Aradhna & Gunia.
Graphics: Pooji.