View Profile
We share scoop on Daddy Kumar all the time, but today we bring you a shocking story on Junior Khiladi, Aarav Kumar.
Akshay Kumar recently accused a Juhu building's security guard of molestation when eight year old son Aarav told him the man had pinched his buttocks for no reason w 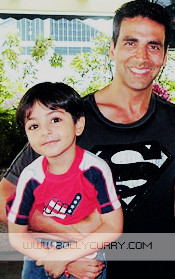 hatsoever. The guard denied the allegation, claiming that he only meant to stop Aarav from entering the the building's meter room for his own safety. Akki didn't buy it and slapped the guard in the face, twice!

Conflicting accounts of what actually happened are making the rounds. Some sources say that Akshay and Twinkle were busy chatting with the friends they were visiting at the Grand Eastern Shores, and so they didn't notice when their son started wandering about and unknowingly headed past the security area. According to them, the guard noticed the boy and simply stopped him from moving ahead. However, the Kumars contest that their son did not even try to enter the meter room and that the guard was just trying to cover himself with a false story. Akshay was outraged and made sure the guard was ousted from his job the very next day.

Twinkle said in an interview that her son was just playing near the stairs with friends when the guard came over and pinched his backside. The boy was very upset and immediately told his parents everything. According to Twinkle, another child they know also suffered the same experience a few days prior but did not tell his parents, while Aarav courageously spoke out and thereby prevented the offense from being repeated again.

Already known for his bravery at this young age, Junior Khiladi is sure to give Daddy tough competition in taking over the action king's throne!