Karan Singh Grover and his better-half Shraddha in an Exclusive conversation with Telly Buzz on life in the Jhalak House, his experience on the dance floor, about his choreographer Nicole and his so-called Dostana with Ram Kapoor.. 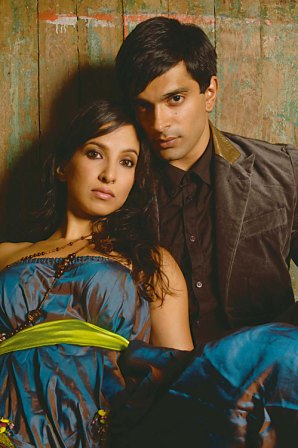 Featured Video
How has your journey of Jhalak been till now?
Karan: It's been quite tiring work all day and rehearsals all night.  The reason for rehearsing at night is that I learn steps in six hours while others learn in just two hours. I do every step 500 times as I can't sleep unless I get it right.

Shraddha: I remember once he came in the morning at 6:00, but now it's a pattern. I told him that he needed to catch with some sleep, so that he could be fresh for the day's shoot. But he told me that he had to learn a step and got back only after learning it.

Karan: If I don't get the choreography right, I keep doing it whole night. It is quite painful.

Shraddha: When I got married, I had a whole husband, but now I have half a hubby, just look at his size now (laughs). Thanks to Jhalak mujhe aadha pati mila hai…

Karan: I have just got ripped, that's it.

Shraddha: Yes baby all the maal from your body has got ripped. He has a bath in pain relieving ointment and his whole body is covered with that full night as every part is in  pain.

Karan: It is still paining

Which was the toughest round in Jhalak?
Karan and Shraddha: I think it's the up coming one of Rajasthani Folk dance.

Shraddha: First he said that the performance which went by was the toughest, as he had to lift Nicole. She has a good height.

Karan: And she is almost my weight so that was bit difficult.

Shraddha: He told me that he was lifting his own weight.

Karan: Every week Nicole tries to put me wrong, if I say this is the toughest. They very next week she gives me something tougher, as she likes to kill me.

Which was your best moment in Jhalak?
Both: When we got 29…

Karan: When Sarojji gave us Rs. 101; that was the best moment. I looked at Shraddha and she almost jumped out of her seat. I thought she will break everything. When I saw Nicole, she had tears in her eyes and I was like in this dream world and was wondering of what's happening to me.
Shraddha: I'm happy as at that point of time, judges lifted Karan. It was very important at that point of time as Karan does not have that much of confidence in his dancing ability and always has a question mark of how it is going or looking etc. I believe he dances well and everyone do, but that whistle and that money reward made him believe that 'Yes I can dance too'.

Can you tell us about your embarrassing moment in Jhalak?
Karan: When I came out to do my first performance, I was like a cool dude as my song was Bachna Aae Haseeno… and had that sports bike. For the first five minutes, it did not start. I was kick starting but it did not start at all and I was quite embarrassed. Every one was looking at me, even the judges and they must have thought that he is a cool guy, but then the bike didn't start.

Shraddha: It did not affect his performance, but threw him off a bit.

We can see the inputs of your choreographer, but what kind of input your wife has given?
Karan: She said earlier that she is the perfectionist. I don't care much of where my hands are going or whether it's pointed or not. But Shraddha is all into the right positioning of the hand. If it should be pointed then it has to be. She just loves dancing so much that if I do it wrong, then it's an insult.

Shraddha: It's too much hard work in choreography.

Karan: So even I do

Shraddha: But if you don't do it right, then it's not effective. He is a bully and he does it to everyone, so I and Nicole gang up. If he doesn't listen to me then Nicole take cares of it and it's vice versa. You need one back up for him as he is a bully.

Karan: I don't do that man

Shraddha: Yes you do

Karan: Shutup or I will hang you upside down.

Shraddha: See what I meant. He is a charmer and he does it with charm that no one comes to know that he is bullying you.

Karan: That's not true as I do everything that they tell me. 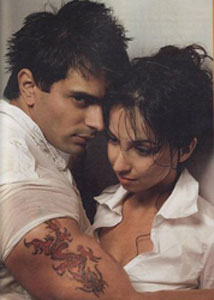 Is Karan a prankster?
Shraddha: Yes he is a prankster, but he is a nice guy and has a big heart. If he likes people he hugs them and that's the quality about him that I love.

Karan: Its not only me man, Sardars are like this, very physical kind of people.
Shraddha: He has a big heart and if some one is dear to him, then he hugs that person like a teddy bear. In Jhalak house apart from dancing, he does not do too much of pranks.

Karan: I don't have time for pranks. If Jhalak was about performing Marshall Arts it would have been easier for me. But it's about dancing and I'm not so much comfortable with it.

Shraddha: We end up having lots of fun though it's not shown and I wish it was. Ram, Marischa, Me, Karan, Nicole and Sexy Singh (Deepak) have fun. There is a mutual admiration society going on where they call Deepak Sexy Singh.

Karan: Its Deepak, Parul's chorographer and I love him man.

Shraddha: They both call each other sexy singh, there is no creativity over here.

Who is you best pal in Jhalak?
Shraddha: It's Nicole

Karan: Ya she is as we have almost adopted her. She lives with us all the time. Besides her it's Ram as I love that guy. I love him and I can't live without him. I have to see him everyday.

Shraddha: Should I leave (grins)

Karan: You can't run away from the truth (laughs). Gautami I'm sorry. I know why you love him and why you married him, I envy you.

Shraddha: Ram is a sweet heart and is too cute.

Karan: He is fat and has a big mouth, but has also got a heart of Gold.

Shraddha: I'm voting for him also.

Shraddha: I'm partial to Karan but I also vote for Ram.

Karan: He gives more votes to me than you do.

What are your expectations from the show?
Karan: I'm expecting a lot of ass whopping from Nicole because with every round, things get tougher and tougher. Every time I feel that we cannot have more steps, but she proves me wrong. The one we will be performing, Rajasthani folk, it's so fast and freaky.

Shraddha: There is no space in Nicole's choreography as she never leaves a beat.

Karan: If I miss one beat then I will miss next ten steps.

Both: She is a fabulous choreographer.

There had been lots of controversy surrounding you and Nicole?
Karan: It's perspective, its how one looks at things and how you want to portray them. Either portray some one in the true light that they are in, or portray some one in the light that you want them to be seen. Its sad that lot of people want to hide the truth and make some friction in their own sense as this is 'Reality'. It's ok as I understand what is happening.

Shraddha: I understand why they are doing this. I know its a reality show and it needs some spice in it. Every time they show those AV's I start laughing and the camera is on my face.

Karan: We have seen of how it is edited and have lots of fun while watching it.

Shraddha: When I look at it I know what exactly happened. I find it very funny. But now I think I should be angry na.

Karan: That will work better for them

Shraddha: We know we are in game, so it's fine. I know him, he knows me and we know Nicole.

Karan: Nicole is seriously like family. I had a chat with her father and I told him that if ever you get bored with her I'm ready to adopt her.

Shraddha: I was really surprised when he said that. Nicole is like our family but now I think I need to be serious.

Karan: You should be

Shraddha: No if I do that then they will think that I am jealous.

Any message to you fans on India-Forums?
Karan: I would like to thank them. This is unconditional love.

Shraddha: Love us. I know as I read it every day on India-Forums. The love that you show makes me jealous man. I would love to say what you all say.

Karan: No as she is busy, ready you all guys.

Shraddha: You give Karan that love and appreciation. Hats off to you. You guys are all around him. With you around him, I feel secure and believe that nothing can touch him. Thank you.

saahr-cute 13 years ago love u karan alot....
and always behind u to support...

kashman1 13 years ago very nice... you can watch them at www.TVfordesis.com

13 years ago they are the sweetest people on earth!:)
cute!:D
luv ya both

Frooti_d_gr8 13 years ago awww.. They are soooooo sweet....
That sweet lil kinda agruements are very cute.. This shows hw much they love each other... N we love u too.. KSG...

N hey Karan i''m with u.. infact all ur fans know that the contoversy of urs n nicole''s is just a TRP raise stunt of Jhalak.. U just rock man... N Ram too.. Ur pair rocks.. Sorry shraddha... :)

+ 6
13 years ago U guys are totally made for eachother.
Keep on rocking!!

13 years ago it was choo chweet yaar
loved the interview

+ 3
13 years ago hey Karan Shraddha LUVED U Both.The interview was awesome n rocking.so now we address our Greek God as MrSEXY SINGH too.