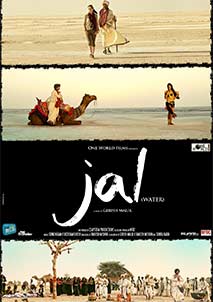 Girish Malik's "Jal", which has been shot across the picturesque Rann of Kutch, will set sail for its theatrical journey in the country March 21.

OneWorld Films Tuesday announced that they have aligned with DAR Film Distributors for the India distribution of the internationally acclaimed Hindi feature film.

For Malik, it was important to choose the right distributor for the project, which he calls a "content driven entertainer".

"The film is called 'Jal', but the plot is about human interaction in all its honesty, albeit told in a very commercially entertaining way laced with rib-tickling good humour.

"It was thus imperative that our distribution partners needed to be a specialist and not just any film distributor. It's with that understanding that we collaborated with DAR. Their modus operandi is suited for the masses and the classes as seen with their last couple of releases," Malik said in a statement.

It is the story of a Bakka, a person gifted with a special ability to find water in the desert. It stars Purab Kohli, Kirti Kulhari, Tannishtha Chatterjee, Saidah Jules, Mukul Dev, Yashpal Sharma and Ravi Gossain.

With the backdrop of water scarcity, the film tells a complex and intriguing story of love, relationships, enmity, deceit and circumstances that bring about the dark side of human character.

Murli Chhatwani, head (Distribution and Syndication), DAR Film Distributors, said: "Judging by the applause that 'Jal' has received both in the international circuit as well as amongst the diverse Indian audience at the IFFI screenings, along with the way Kutch has been captured in the film, we are very positive about its success."

Revenge takes center stage as Out of Love starring Purab Kohli and ...

Kirti Kulhari ends her marriage; Puts out a stern message for ...