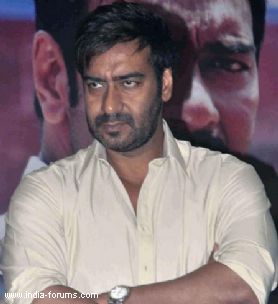 Actor-producer Ajay Devgn has not yet seen his own films "Himmatwala(2013)" and "Rascals". He says during the making of most of his movies itself, he realises whether a project will work or not.

"Himmatwala(2013)", directed by Sajid Khan, did not receive a positive word. Ajay says though the original script of the film was good, things went wrong while shooting.

"There were no punchlines. 'Himmatwala' would have worked today if it had today's punchlines and today's styling. He made it like the 1980's only. That didn't work," he added.

However, despite getting the feeling that "Himmatwala(2013)" wouldn't work, Ajay gave the film his best shot and promoted it. Why?

"There is so much of money and stakes involved (in a film)...You can't say, 'This is not working so I am not working'. It's unethical. If there is some alternative, then it's a different thing."

"When you are acting in a film, everybody is not ready to agree with you. If you have been paid for a film, you have to do as much as you can do."