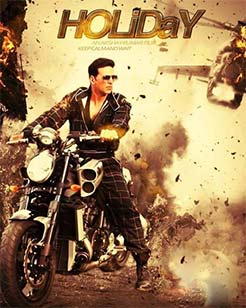 "Holiday - A Soldier Is Never Off Duty" has minted Rs.102.62 crore in three weeks at the domestic box office and producer Vipul Shah feels ecstatic as his alliance with Hindi movie star Akshay Kumar has once again struck the gold.

Shah-Akshay's team has delivered four hits - "Aankhen", "Waqt - The Race Against Time", "Namastey London" and "Singh Is Kinng". Their only fiasco so far has been "Action Replayy".

Talking about his partnership with Akshay, Shah said: "It has been a fantastic journey with Akshay. 'Holiday' is our sixth film together and four out of five films were successful. What is very important is that all films got a lot of credibility from the audience."

Their "Holdiay", about terrorism, in which director A.R. Murugadoss focussed on sleeper cells and how quietly they merge into their target society before unleashing havoc, came out June 6.

The thrilling drama had new style of action directed by renowned British stuntman Greg Powell, known for his work in Hollywood's super hit franchises such as "Harry Potter" and "James Bond".

The filmmaker said the successes have helped them in winning a "good reputation".

"My relationship with Akshay has reached that stage where we constantly want to do better work together. It has become stronger by the day," Shah told IANS.