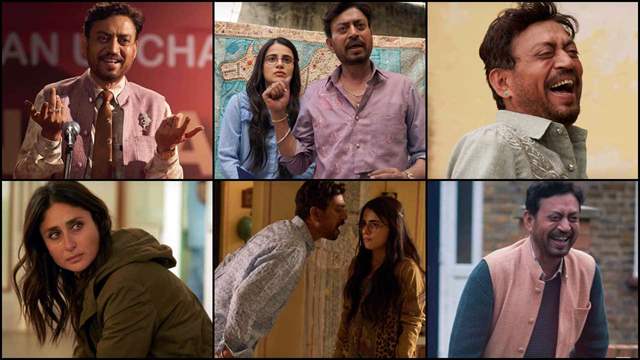 Irrfan Khan gave a powerful message with his 2017 film, Hindi Medium and won hearts with his stellar performance. In the film, he was seen portraying a rich businessman who struggled with English and managed to speak crooked English. A big house, good clothes, a cute daughter, the couple has everything but fitting in a high class society and getting their daughter admitted to a prestigious English medium school in Delhi becomes a tussle for him and his wife.

The film surely was filled with humor but most importantly shared a very powerful and beautiful message about education and is now getting a sequel titled Angrezi Medium starring Irrfan, Radhika Madan, and Kareena Kapoor Khan in lead roles.

This morning, the makers of Angrezi Medium dropped its trailer on the internet a while ago and it will surely brighten up your day. The film explores the beautiful father-daughter bond between Irrfan and Radhika Madan. The actor plays a single father taking care of his school-going daughter.

The trailer begins with the proud father delivering a speech for his daughter as she wins a prize at her school. Unable to speak fluent English, he signs off quick. His daughter Tarika wishes to study abroad while a doting father, Irrfan aka Champak goes the extra mile for fulfilling her dreams. Kareena Kapoor Khan enters the scene as a breath of fresh air and nails her cop lady avatar!

Irrfan recently announced his comeback with an emotional note. The actor has returned from London post his Cancer treatment and Angrezi Medium is his first film since then. Irrfan reached out to his fans through a heartwarming voice note yesterday where he opened up on his absence from the promotions of his film, the reason being his health. The actor has been battling Cancer for long now. He says that he has been dealing with it with a lot of positivity and his film has helped him keep his mood light. Angrezi Medium also stars Deepak Dobriyal, Kiku Sharda, Ranvir Shorey, Dimple Kapadia and others and is slated for March 2020 release.