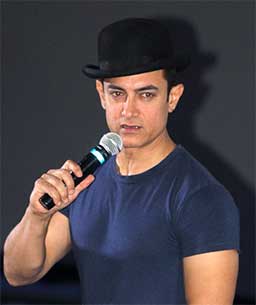 Aamir Khan-starrer "Dhoom 3" has grossed Rs.107.61 crore in the first three days of its release and the collection of the sleek action thriller includes earnings from the Tamil and Telugu versions. Trade pundits predict that it will amass Rs.250 crore by the end of this week.

Directed by Vijay Krishna Acharya, the third instalment of Yash Raj Films' popular "Dhoom" franchise opened to mixed reviews. The movie, which also features Abhishek Bachchan, Uday Chopra and Katrina Kaif, is expected to get more footfalls in the coming week, thanks to Christmas and New Year holidays.

"The movie is still doing good business. Dec 25 is Christmas, so the demand for the tickets is more. But the movie is doing well on weekdays too. It surely has the potential to cross Rs.250 crore this week," Rajesh Thadani of Multimedia Combines told IANS.

"The movie has done really well and is expected to do good business in the coming weeks as well. For Dec 25 alone we have sold 4,000 tickets that means we have already sold 50 percent of our tickets as our capacity is of 8,000," said Punit Sahay, senior manager programming, Spice Cinemas.

"For 26th we have sold 1,500 tickets in advance booking. The schedule from Friday onwards will be released tomorrow (Tuesday), so the status of advance booking can be known then. But, it's expected that the movie will earn Rs.250 crore in the first two weeks," Sahay added.

"Dhoom 3" won't face any big competition at the box office till "Dedh Ishqiya" comes out on Jan 10, next year.

Gautam Dutta, COO, PVR Cinemas, says their pre-booking status for the week is worth Rs.3.5 crore.

"The movie is expected to do good business this week with Christmas holiday that will be followed by a weekend. We've got Rs.3.5 crore worth pre-booking," Dutta added.

Manoj Desai of Gaiety Galaxy in Mumbai said the matinee shows for the movie has gone down, but the other shows are going houseful and added: "We can only give details about the advance booking on Wednesday."

Along with the Hindi version, the dubbed Tamil and Telugu versions of "Dhoom 3" were released in Tamil Nadu and Andhra Pradesh, respectively.

Interestingly, in Chennai, more than 50 percent of the shows are sold out for the next three days at major multiplexes.

"Since its the Christmas weekend, the film is expected to do equally good business. We have approximately about 10-15 shows over the next three days, including Monday. Tickets for half of the shows have already been sold out," a representative of Satyam Cinemas in Chennai, told IANS.

"We will only open bookings for this week's releases on Wednesday. Therefore, until then 'Dhoom 3' is expected to continue its good run. Even after that it depends on how the new releases are received by the audience," he added.

Rakki Cinemas sold about 1,200 tickets for the Tamil version of the film in the opening weekend.

"This is the highest number of tickets we have ever sold for a dubbed Hindi film. In fact, we released with equal number of shows in Hindi and Tamil, but the latter superseded by a large margin," Manoj Kumar, a representative of Rakki cinemas, told IANS.

"We have about 40-50 percent bookings for the next few days in this week. I don't think it's increase but I feel this is a pretty good number for a dubbed Hindi film. Aamir Khan's presence made a lot of difference," he added.