After playing Farhan Akhtar's petite wife in "Rock On!", Prachi Desai has now teamed up with Tusshar Kapoor in "Life Partner" and she had to shoot some intimate scenes in the film. While she insists she wasn't uncomfortable, the actress admits she was definitely a bit shy. 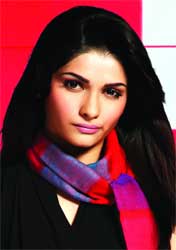 Featured Video
"I am a little shy but I don't know why everyone is saying that I was uncomfortable doing those scenes. In fact, everyone on the set did everything to make me comfortable," Prachi Desai said.


Her co-star Tusshar had said that Prachi wasn't comfortable doing intimate scenes with him and was too much into the "don't touch me" mode.

The 20-year-old, best known for her role as Bani Walia in television serial "Kassamh Se", is tired of doing mature roles and wants to play someone more her age.

"I'm waiting to do something young, something that goes with my age. I have had enough of these mature roles. It would be nice if I get to play something close to my age," Prachi said.

The young actress was in the capital for designer duo Kapil and Monika's collection for the "Celebrating Vivah 2009" event and walked the ramp in a heavy, embroidered baby pink lehenga.

Elaborating about her role in director Rumi Jaffrey's "Life Partner", Prachi said she could relate to her character and it was easy to play a shy girl.


"In this movie, the role I'm playing is of a very shy girl who likes silence and I am very much like that in real life. I'm very down-to-earth and simple too."

The actress has also signed a movie "Once Upon A Time" with mentor Ekta Kapoor in which she plays a don's wife.

Not revealing much about the character Desai said: "It's too early to talk about it."

She, however, said that she doesn't see much of a difference in the work environment between television and movies.

"I don't miss TV at all. It's like graduating from school to college. There is not much of difference but, yes, working in showbiz increases the level of expectations of your fans. But those expectations keep us going as we are here because of their love," she said.

Talking about her dream role, Prachi said she wants to essay the role of Paro in "Devdas" if it is made again for the big screen.

"Paro of 'Devdas' is a very beautiful character and Aishwarya Rai looked beautiful in it. Though it would be very difficult to re-create the magic of that movie again on big screen.... if it is done, I would love to essay the role of Paro," Prachi said.