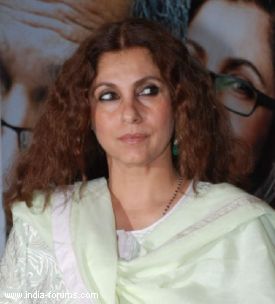 Actress Dimple Kapadia may not have time for herself but is such an avid fan of "Bigg Boss" and its host, Bollywood star Salman Khan, that she takes out time to watch every episode of the reality show.

The "Bobby" fame actress is hardly seen at the Bollywood bashes and when asked what keeps her busy, she said: "I don't know what I am busy doing, but I am very busy. I don't have time for myself."

Ealborating on her daily routine, the 56-year-old, who was married to late Hindi movie superstar Rajesh Khanna, added: "I am a grandmother, so I enjoy being with them (grandchildren). I love Sanskrit shlokas and I try to learn them - that is my passion."

"I have enough to keep me going and I love watching 'Bigg Boss'. I totally enjoy that. I don't miss any episode."

The seventh season of the "Bigg Boss" is currently aired on Colors channel and interestingly, one of the contestants on the show was Anita Advani, who claimed to be Rajesh Khanna's girlfriend.

Meanwhile, the National Award winning actress, known for her powerful performances in parallel cinema such as "Kaash", "Drishti", "Lekin", "Rudaali" other than commercial hits like "Saagar", has stepped out of her comfort zone to promote her forthcoming release "What The Fish".

From Saif Ali Khan to Kareena Kapoor to her son-in-law Akshay Kumar, many actors came on "Bigg Boss Saath - 7" set to promote their films.

Will she promote "What The Fish" on "Bigg Boss"?

"I don't think we are going. No, we are not going there. But I am a big Salman Khan fan," said Dimple and added that she has no plans to enter the television space.

"I don't have the talent to do something of that sort. I can do something for 30 days or 50 days. I can program myself, but I can't give my year for a shooting. No, I will die. I can't handle it," she said.

Gurmeet Singh directed "What The Fish" is a comical mystery and revolves around a 67-year-old, divorced and grumpy woman, Sudha Mishra (played by Dimple), who gives the responsibility of her house to her niece's fianc while she's away.

Made under the banner of Viacom 18 Motion Pictures, "What The Fish" releases on Dec 13.